James Faulkner beat Maxwell's bat on more than one occassion. One bad ball (a full toss) was dispatched over long-on for a six. Maxwell attemps a pull off the last ball but the third-man failed to catch the ball courtesy of a top-edge. 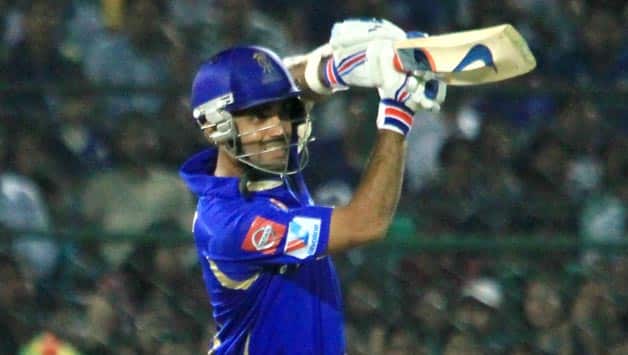 Lasith Malinga shows why he’s considered the best death bowler in the world as he gets Brad Hodge trapped boot before wicket with a lethal yorker. New man Kevon Cooper is beaten by another yorker, but spanks the next one over wide long-off for maximum. Malinga persists as he fires in another toe crusher and Cooper can’t do anything. Malinga finishes it off in style as the Royals fall short by 14 runs.

Brad Hodge brings up the fifty of the partnership by spanking Dhawal Kulkarni’s full toss to the deep point fence. He almost gets another one straight down the ground, but for some good work at the rope by Harbhajan Singh. Ten runs come from the over.

Lasith Malinga bowls a superb over, cinceding just five runs, which is priceless at this stage. Mumbai still are in the driver’s seat here and it’s theirs to lose.

Mitch Johnson calms some nerves in the Wankhede crowd with a brilliant over, apart from a French cut that beat everyone and went for four.

Brad Hodge hasn’t given up! He’s hit Pragyan Ojha for four boundaries and is even given an extra life by Mumbai. Ambati Rayudu looks to have caught Brad Hodge at deep mid-wicket, but the ball pops out of his hands and goes for four. Is there a turnaround possible here? Hodge and Binny seem up for it!

Lasith Malinga comes back into the attack and the Royals manage eight runs from the over. They need two a ball from now.

Pragyan Ojha spoils a good over with a loose last ball which is swept for four by Stuart Binny.

Dishant Yagnik cuts Harbhajan Singh past point for four off the first ball of the over. The fielder at point should have done better to stop that. However, Bhajji has his man soon enough as Yagnik gives him the charge but completely misses the ball and is bowled.

Stuart Binny gives Pragyan Ojha the charge as he lofts him over long-off for six, before cutting magnificently for a boundary.

Stuart Binny ruins Harbhajan Singh’s over with a reverse sweep that finds the top edge but manages to clear short fine-leg and run down for four.

Pragyan Ojha comes into the attack and gets a wicket straight away — a huge one! Shane Watson looks to loft the bowler over the sightscreen but finds the bottom of the blade and gives Kieron Pollard an easy catch. To rub it in, Pollard goes and fields at long-on which is right in front of the Rajasthan dugout, and the two exchange words again!

Harbhajan Singh concedes five wides after the ball spins viciously and beats Dinesh Karthik behind the sticks. Spoils an otherwise good over from the off-spinner. The first Strategic Timeout is taken.

Lasith Malinga comes into the attack and bowls a decent over upto the fourth ball, before Shane Watson makes use of two short-pitched deliveries and pulls them hard over deep squareleg for six.

Harbhajan Singh comes into the attack and bowls a good over, conceding just three runs as the pressure continues to build on Rajasthan.

Ajinkya Rahane skies Dhawal Kulkarni miles in the air but only upto Lasith Malinga at mid-off. The Royals continue to slide down the pit! Mumbai in total control here.

Sanju Samson exquisitely drives Mitch Johnson wide of point for a boundary. Such elegance from the 18-year-old. However, Samson pours water over all the praise as he mistimes a pull and gets another leading edge straight to mid-off. The Royals are in some trouble! Meanwhile, some words are exchanged between Kieron Pollard and new batsman Shane Watson. The umpires have a word with Pollard and his skipper Rohit Sharma.

James Faulkner looks to hook Dhawal Kulkarni’s short-pitched delivery, but gets the leading edge that goes high above the point area, as Glenn Maxwell calls for it and takes the catch.

James Faulkner uppishly drives Mitchell Johnson through the packed off-side field and finds the gap, as the ball runs over to the fence for four.

James Faulkner’s outside edge goes sailing over the slips for four off the bowling of Dhawal Kulkarni.

Rahul Dravid flicks Mitchell Johnson off his pads for four after the Australian strayed down the leg. You cannot do that to a man of his class! However, Johnson has his man in the same over after getting a faint nick off an attempted pull. Dravid wasn’t happy with the decision and had a few words to say to someone, either one of the players or the umpire. There go a few Fairplay points.

Mitchell Johnson tries a cheeky flick over fine-leg countryman off James Faulkner, but can only find the fielder stationed in the circle. Mumbai manage to get just six runs in the final over.

Harbhajan Singh ruins Kevon Cooper’s over with a mistimed hit that goes for six! Bhajji went for the pull, but got the top edge that sailed over deep point boundary.

Ambati Rayudu swings and looks to clear deep mid-wicket, but the ball drops inches short of the boundary and into Sanju Samson’s hands to give the Royals another wicket. This is not the ending Mumbai would have hoped for.

Kieron Pollarg is run out! The Trinidadian first gets a leading edge that drops just short of bowler Kevon Cooper and looks to steal a run. Cooper picks up the ball and takes a shy at the stumps, and hits bull eye! Pollard was dawdling to the crease, not expecting a throw and is miles short. Big wicket for the Royals!

Rohit Sharma spanks James Faulkner for four through the covers. Freed his arms and bam! However, Faulkner has the last laugh after a mistiming a swing over square-leg that goes straight down Shane Watson’s throat.

Kieron Pollard pulls Shane Watson to the deep mid-wicket fence for a boundary to spoil an otherwise good over. How many will Mumbai get off the last five? 200 possible? Should be if Pollard sticks.

Rohit Sharma guides a short and wide delivery from Tambe to deep point for four before Kieron Pollard picks up from where he left off the other night with a mighty straight drive that goes sailing into the second tier. Massive!

Aditya Tare tries to slice Kevon Cooper over cover, but manages to reach only Shane Watson to end a fantastic innings.

Dinesh Karthik sweeps Pravin Tambe for four to the deep square-leg fence, before a similar shot is hit straight to Sanju Samson at deep mid-wicket. Dishant Yagnik then fails to collect a ball that spun a mile and beat the advancing Tare’s bat as a stumping opportunity goes begging.

Aditya Tare is determined to make this his night as he elegantly drives James Faulkner wide of long-off for four. Rahul Dravid brings the long-off fielder into the circle, and Tare responds by driving the ball over him for four more. Tare brings up his fifty in the over as well. It’s been a fantastic knock from the youngster! Here is an interview I did with him a couple of months back.

Dinesh Karthik makes room for himself and sweeps Pravin Tambe over short fine-leg for a boundary to provide the only action of the 10th over. Mumbai will be pleased with their position at the halfway stage.

Aditya Tare makes use of a full toss from Kevon Cooper and sweep-flicks it away for a boundary. He’s oozing confidence right now.

Tweaker Pravin Tambe comes in and calms things down for the Royals as we take the first Strategic Timeout at the end of the seventh over.

Aditya Tare places Stuart Binny brilliantly wide of long-ff to get another boundary, before bisecting the men placed at deep mid-wicket and long-on for four more. Crunching shots, those! The lad’s looking good on his return to IPL after three years. Rahul Dravid then gives him a lifeline after dropping what should have been an easy catch at mid-wicket.

Dinesh Karthik drives Shane Watson past mid-off for his first boundary. DK will be key here for Mumbai in the absence of Dwayne Smith and Sachin Tendulkar. Aditya Tare then says, “I’m here too,” as he spanks Watson over long-on for six. Mumbai will be pleased with this start, despite Maxwell’s wicket.

Aditya Tare finally gets going as he sweeps his Mumbai Ranji teammate Ankeet Chavan for two boundaries in a row.

Rajasthan Royals’ Mr Reliable, Shane Watson, is brought into the attack and the Australian responds immediately as he traps Glenn Maxwell in front. Maxwell isn’t happy with the decision, and the replays show that there might have been an inside-edge. There were definitely two sounds there.

It looks as if Glenn Maxwell wants to prove why he is worth a million dollars as he lofts Ankeet Chavan over dep mid-wicket and then over long on for a couple more maximums. This is turning out to be a good start for Mumbai.

James Faulkner beat Maxwell’s bat on more than one occassion. One bad ball (a full toss) was dispatched over long-on for a six. Maxwell attemps a pull off the last ball but the third-man failed to catch the ball courtesy of a top-edge.

Ankeet Chavan bowls a two-run first over for Rajasthan Royals. Maxwell tried an impetuous shot off the last ball of the over: a reverse sweep. A good start for Royals at the Wankhede Stadium.

Rajasthan Royals captain Rahul Dravid won the toss and elected to bowl against Mumbai Indians in their important IPL 2013 match at the Wankhede Stadium on Wednesday.

The big news from the middle is that Sachin Tendulkar will be missing the game due to an injury in hand. Wicketkeeper-batsman Aditya Tare comes in for the little master, while Glenn Maxwell also gets a second game in place of Dwayne Smith.

Hello and welcome to our coverage of Indian Premier League (IPL), 2013 encounter between Mumbai Indians and Rajasthan Royals.

This is Jaideep Vaidya and I will be bringing you the over-by-over updates of the game. Here‘s our preview of the match.