So, an easy win in the end for Royal Challengers Bangalore. They chased down 154 with 15 balls to spare thanks to the Gayle-storm, which has propelled them to the top of the points table. 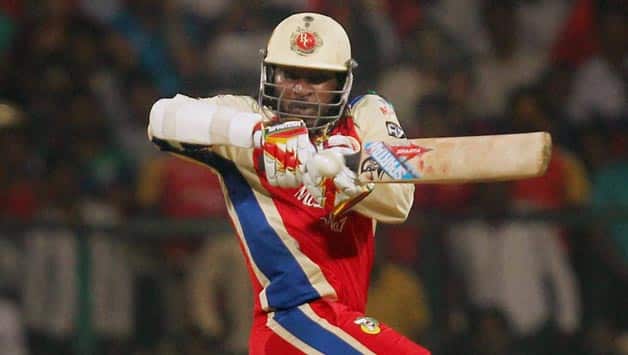 Chris Gayle has opened the batting for Bangalore © PTI

So, an easy win in the end for Royal Challengers Bangalore. They chased down 154 with 15 balls to spare thanks to the Gayle-storm, which has propelled them to the top of the points table. That’s it from us from this game. Join us in a bit on CricketCountry for Pune Warriors India vs Rajasthan Royals.

Bangalore go 10 runs closer to their target as Rajat Bhatia gets a bowl. Just 10 more required of 18 balls.

Chris Gayle punishes Jacques Kallis’s full-length delivery outside off for six over long off, before the South African switches to around the wicket. It makes no difference to Gayle as he tweaks the angle a bit and dispatches Kallis for six more over long on. Kallis just doesn’t learn as he bowls a low full toss, which is sliced to deep backward point for four more.

Sunil Narine finishes off his spell with a peach of a delivery that beat the edge of AB de Villiers. Narine’s figures read none for 17 off his four. KKR would be ruing they don’t have four more of him.

Jacques Kallis bowls a tight over to keep Kolkata Knight Riders in the loop. The Royal Challengers need 40 off 36 balls.

Chris Gayle brings up his fifty off 32 balls with a single as Sunil Narine is given due respect by his West Indian teammate. RCB need another 45 runs off 42 balls.

Manoj Tiwary misses what would have been one of the catches of the tournament at cover as AB de Villiers goes for the big slash and escapes. Chris Gayle then ruins a good over from Lakshmipathy Balaji with a booming drive over mid-wicket. That almost touched the moon in it’s upward arc!

Chris Gayle hits a flat six over deep-midwicket as Bangalore continue to target Pradeep Sangwan. Gayle gets four more in the same area later. KKR could do with the big Jamaican’s wicket…now!

Virat Kohli (35) fails to pick Lakshmipathy Balaji’s slower one as he goes for the drive over point. The ball goes flying in the air and is pouched by Eoin Morgan. Some words are exchanged between the two captains as an enraged Kohli walked back. Game on!

Pradeep Sangwan is battered in his first over. Chris Gayle begins the over with a backfoot slash past mid-off for four, before Virat Kohli gets in two consecutive sixes via a pull over mid-wicket and a hook over fine leg. KKR can bid goodbye to this game if they allow these two to continue. Kohli, meanwhile, is the new owner of the Orange Cap.

Lakshmipathy Balaji bowls a good first over, save for the last ball which was full and pitching outside off-stump, waiting to be hit. Kohli obliges with an elegant cover drive for four. The first Strategic Timeout of the innings is taken.

Virat Kohli gets a sweetly timed late cut down third-man for four as Sunil Narine concedes seven runs in his second over.

Virat Kohli goes for the charge and finds the mid-wicket and long-off boundaries by opening the face of the bat with his drives. Chris Gayle finishes it off with a smack over long-on for maximum and then steps out, gives himself room and drives McLaren for another six over cover. Normal service resumed for RCB.

Sunil Narine comes into the attack and bowls another tight over for Kolkata. Just two runs come off it. Pressure building on the Royal Challengers. Is this the lull before the storm? The home crowd must certainly be hoping so.

Jacques Kallis bowls a maiden over! What’s going on here?! Virat Kohli fails to find the gaps on balls he connects. You don’t often get to see this with Gayle and Kohli at the crease.

Ryan McLaren gets the caught-behind dismissal that eluded Kolkata in the earlier over as he gets Mayank Agarwal to edge to Manvinder Bisla behind the sticks. Ideal start for KKR. Chris Gayle then goes for the pull off the last ball, but doesn’t middle it. However, it is good enough for the ball to go over long-off for six. What power! The ball is doing a bit for McLaren.

Mayank Agarwal gets his boundary by making the most of a wide, juicy delivery from Jacques Kallis and hitting it to the deep backward point boundary. Kallis has a huge appeal for caught behind later, but is turned down by the umpire. There was definitely a sound there.

Chris Gayle is up and away straight away as he pulls Ryan McLaren for four to the mid-wicket fence. McLaren responds by almost taking Gayle’s outside edge off the last ball.

So, Kolkata Knight Riders suffered a mini-collapse after Gautam Gambhir’s dismissal, going from 124 for three to 154 for eight in a matter of 22 balls. Join us in a bit for the chase.

Ryan McLaren takes one for the team as he attempts an impossible single in a bid to give Rajat Bhatia the strike. RP Singh does not miss the stumps and McLaren has to go. Bhatia, however, does not take advantage of McLaren’s sacrifice as RP bowls him the next ball. Pradeep Sangwan sneaks four past the keeper to the third-man fence on the last ball of the innings to take KKR to 154 for eight.

Rajat Bhatia picks up two exquisitely placed boundaries to the fine-leg fence to boost KKR’s score. 160 is still on. How many can they get in the last over?

Eoin Morgan (2) does not last long after trying to dispatch a low full toss from RP Singh over long-off, but can only find substitute fielder Daniel Christian. Rajat Bhatia is the new man in at No 7. Manoj Tiwary (23) then finds AB de Villiers at mid-wicket off another full toss, but this time a higher one. The third umpire is consulted whether the ball was above waist-height and Sudhir Asnani confirms it was not.

Royal Challengers Bangalore finally get the big wicket of Gautam Gambhir (59). The left-hander tries to smack Vinay Kumar over mid-wicket, but finds the leading edge that goes high up in the air. Kumar calls for the catch and pouches it easily. Can KKR still get to 160? Eoin Morgan is the new man in.

Gautam Gambhir hooks Jaydev Unadkat’s last ball of an otherwise impressive spell for six. Unadkat ends with figures of none for 34; he’s bowled better than that.

Muttiah Muralitharan completes his not-so-impressive spell of 4-0-30-0 as we move into the last five overs of the innings. KKR need 50-odd to get past 160. Will they get there? If Gautam Gambhir is there at the end, it shouldn’t bhe difficult. The India discard has played really well. Meanwhile, the umpires have signaled the second Strategic Timeout.

Gautam Gambhir completes his 17th IPL fifty in the over as KKR get nine runs. What will be a safe score here? KKR would be targeting at least 160 the way they are going.

Moises Henriques gets rid of the dangerous Yusuf Pathan (27) with a leg-cutter than was sent by the Baroda batsman straight dwon the throat of long-off. Gautam Gambhir looks disappointed as Virat Kohli points the way back to the pavilion.Henriques finishes his four-over spell with figures of four for 24. Job well done!

Yusuf Pathan finally lets loose as he merely flicks Jaydev Unadkat over the deep mid-wicket fence for maximum. Later in the over, Gautam Gambhir almost runs Yusuf Pathan out this time. Comical stuff! KKR are going well and the cheeky singles are really unnecessary at this stage.

RP Singh bowls another good over for KKR. Six runs come off it and this must be irritating Yusuf Pathan. Something is bound to happen, here!

Muttiah Muralitharan bowls a tight over, conceding just two runs. The bowler bowling the next over better watch out!

Jacques Kallis (16) steps out, gives himself room and opens the face of the bat against Vinay Kumar, and perishes as the ball finds the safe hands of Moises Henriques at the deep point boundary. The teams take the first Strategic Timeout of the innings before Yusuf Pathan gets a promotion and comes in at No 4. Pathan shows his intentions straight away with three boundaries to different parts of the ground. Fourteen runs and a wicket from the over.

Gautam Gambhir plays the shot of the day so far with a beautiful slog-sweep off Muttiah Muralitharan to the deep mid-wicket fence. Ruins an otherwise good over from the spin wizard.

Vinay Kumar comes in for a bowl and does a decent job of it, conceding just four runs.

Gautam Gambhir welcomes Muttiah Muralitharan into the attack by stepping down the track and cracking him through the covers for four. Murali then errs by over-stepping and condedes another boundary off the free hit. Meanwhile, Jacques Kallis goes past 2,000 runs in the IPL. He is the first overseas player to do so. KKR are however flirting with danger with their running between the wickets. Gambhir has almost run himself out at least thrice.

Jacques Kallis hits a glorious straight drive for four in Moises Henriques’s third over. The Australian all-rounder has done well, conceding one for 15 in his three.

Jaydev Unadkat’s excellent over is spoiled by Virat Kohli’s over-enthusiasm to have a shy at the stumps. Jacques Kallis hit the ball straigt to Kohli at mid-wicket, who picked it up and caught Gautam Gambhir backing up too far. Kohli flung the ball at the stumps with Gambhir safely back and the ball missed and rolled along to the fence for four.

Gautam Gambhir has brought his aggressive best to the Chinnaswamy. A cracking on-drive to the mid-wicket fence highlights Moises Henriques’s second over.

Gautam Gambhir almost runs himself out in the second over! The left-hander hit the ball towards point and thought he had found the gap between gully and point, but Virat Kohli dived to his right and cuts the ball with Gambhir halfway down the pitch and Jacques Kallis the least interested. Fortunately for KKR, Kohli’s throw to the stumps was wayward. Gambhir ends the over on a high with two boundaries to deep point and long-off.

Moises Henriques bowls the first over and gets a wicket straight away. Manvinder Bisla cuts straight to Lokesh Rahul at point and RCB are on the front-foot straight away.

Royal Challengers Bangalore captain Virat Kohli has won the toss against Kolkata Knight Riders and has elected to field first in the Indian Premier League (IPL) 2013.

As has been the norm this IPL, there is a tinge of grass on the pitch and Kohli perhaps wants to make the most of it early on. RCB have made one change to their line-up from the team that beat the Sunrisers Hyderabad — Lokesh Rahul, the young Karnataka batsman, comes in for left-arm spinner Murali Kartik. So, batsman for a bowler. Interesting!

However, the shocker comes from the KKR camp. Brett Lee sits out of this game and Ryan McLaren has come in for the Australian speedster. Is he injured or is this some weird experiment?

Hello and welcome to CricketCountry’s live blog of the 12th match of the Indian Premier League (IPL) 2013 between Royal Challengers Bangalore and Kolkata Knight Riders.

This is Jaideep Vaidya bringing you over-by-over updates of the match taking place at the Chinnaswamy Stadium. And yes, I’m one of the unfortunate few working on a public holiday! Happy New Year, by the way!