Cooper delivered the body blow by dismissing Morgan on the first ball of the over. Shami was dismissed off the last ball. Royals won the game by 19 runs. Cooper (3-15) and Trivedi (3-23)  were the stars with the ball. 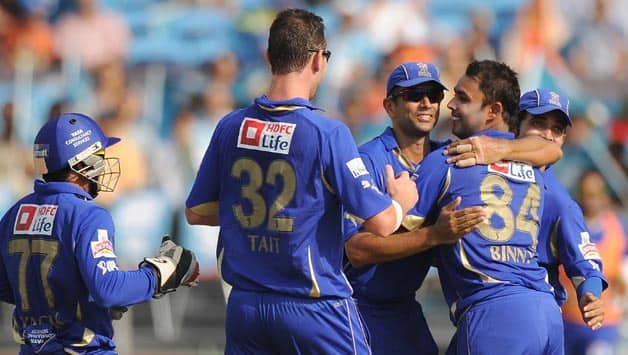 Cooper delivered the body blow by dismissing Morgan on the first ball of the over. Shami was dismissed off the last ball. Royals won the game by 19 runs. Cooper (3-15) and Trivedi (3-23)  were the stars with the ball.

KKR get 13 off this over. Morgan used Tait’s pace and worked him over fine leg for a six. So KKR are in the hunt. They need 23 off two overs.

Shami went for almighty slogs off the last two deliveries. Cooper used his variations in this over. Morgan could not get under any delivery. Three overs and 36 runs to get.

Lee hit Sreesanth for a boundary but went for another hit that failed to clear long-on. Kolkata need 41 off four overs. It is fair to say this is now a match between Royals and Morgan.

Tait got Bhatia off his first delivery. Lee scored one off the next three deliveries. Morgan finished off the over with two boundaries. KKR are getting  boundaries.

Morgan is looking dangerous here. He carted Shukla for a six, and KKR run-chase gets an impetus. Royals must not relax.

Trivedi has been carted. A 15-run last over from Trivedi spoils his figures. He had conceded eight off his first three. KKR are fighting.

Trivedi misfielded, that was sloppy. Royals mustn’t relax KKR A six runs over is still good from Royals’ perspective.

Trivedi is on a roll. KKR are capitulating. Shukla uses long handle but fails to get the distance. The elavation was there. Royals are on top.

Sreesanth had Morgan leg before but Aleem Dar missed that one. KKR are struggling to get runs. Royals looking favourites here on their fortress.

Watson floored down a chance of Morgan. If Watson would have held that, it would have been virtually game over for KKR. Trivedi is bowling a good line.

Cooper got the huge wicket of Yusuf Pathan. A nothing shot played by Pathan. Kolkata are playing poor shots. Royals are on top at Jaipur.

Siddharth Trivedi gets Tiwary and Gambhir. That has been Kolkata’s pattern so far – losing two wickets in an over. Royals looking to bowl some frugal overs and keep the pressure on KKR.

Bizzare start to the over from Gambhir. He danced down the track and missed the ball by a country mile. The next ball went up in the air, in no man’s land. Cooper troubled KKR captain in his first over.

KKR’s run-rate is good but they have lost two wickets. Shukla’s full delivery was hit for a boundary by Tiwary.

Tait is really working up good pace. He bowled the fastest ball of the tournament (150.1 kmps). A three run over is a good effort after Shukla’s twin-strikes.

Shukla got two in two (technically although he bowled a wide in between). Bisla fell to an incredulous shot while Kallis tried to dab Shukla towards third man but got an edge. Royals get the early breakthroughs.

Shaun Tait started the over with a couple of wides. He is working up good pace but Tait has to get his radar right.

Shocking effort from Shaun Tait at fine-leg gave Gambhir a first ball boundary. Gambhir announced his intentions by charging down the track and hoicking Sreesanth over square leg for a six. Poor line from Sreesanth despite getting a lot of swing.

Royals got 38 off the last three overs. Thanks to Hodge and Yagnik. Kallis gave away 12 off the final over. It is a fighting total. Will KKR chase 145? Join us in 10 minutes.

When was Narine hit for 18-runs in an over? What wonderful hitting from Yagnik who switched over to conventional hitting after failing with his ramp shot. A six and reverse-sweep (a conventional shot) in this format earned him a four. Royals have got that big over.

Yagnik tried an impetuous ramp but failed to make contact. Hodge carted Lee through mid-wicket. Eight runs off the 18th over. Royals are now in search of big overs.

Only six runs have come off the last two overs. Narine started the slide and Kallis complemented him well. Hodge waiting for an opportune moment to launch the final assault.

Narine gets two wickets off two deliveries and Royals lose momentum. One run conceded. Hodge has to bat through for the Royals now.

Rahane played shot of the IPL so far. He effortlessly hit Shami for a six over covers. Hodge also thwacked Shami for a boundary. Royals scored 15 off this over.

Hodge pulled Bhatia in front of mid-wicket for a boundary. Royals ensuring that they are get singles as well. A good move on from Royals.

Royals score runs off every ball. Shukla was cut again by Hodge behind point for a boundary. A 10-run over for Royals. And there is some delay.

Narine gives away only two runs. KKR are attacking. A wicket here will peg Royals back. Royals played Narine cautiously.

Laxmi Ratan Shukla got a wicket off his first delivery when he trapped Binny plumb in front. Hodge then cut Shukla behind point for a four. Shukla bowled outside off stump and got some movement.

Stuart Binny used deft touch to get a boundary that eluded short third man and then lofted Bhatia over covers for another boundary. Royals score 10-runs off the 10th over.

Another over where the last ball goes for a four. Rajasthan are getting an odd-boundary but still they are struggling for momentum. Kallis gave away seven off his second over.

Dravid missed a straight delivery from Rajat Bhatia and was castled. Bhatia just bowled wicket-to-wicket and got the prized scalp of the Royals skipper. Bhatia gives away four off his first over.

An exquisite cover-drive from Dravid was the best shot of the innings so far. Kallis was taken for seven runs off his first over.

Gambhir got his trump card Narine into the attack who was attacked by Rahane and was dispatched for a boundary through mid-wicket. No turn available for Narine.

Dravid executed a leg-glance off the final ball to spoil what otherwise was a good over by Lee. So 27 off five overs. A decent start for Royals.

Two fours were scored by Rahane who is looking comfortable at the crease. Shami has not quite found his line. Rajasthan have got a move on.

Brett Lee got the wicket of Watson who mistimed a cover-drive and presented a simple catch to Morgan at covers. Watson had scored four in an unconvincing fashion off the second delivery. Watson doesn’t make an impact with the bat for Royals. And he broke his bat for the second time today.

Shami Ahmed got some bounce and movement in the over. He erred on a couple of occasions but the carry on the wicket will keep the Kolkata pacers excited.

Brett Lee broke Watson’s bat in the first over. Watson failed to execute a hook shot and the ball hit bottom of his bat. Lee worked up some pace and got some movement in this over. A sedate start from the Royals.

Kolkata Knight Riders captain Gautam Gambhir won the toss and elected to bowl in Match 8 of IPL 6 agains Rajasthan Royals, who will be boosted with the return of all-rounder Shane Watson.

Kolkata retain the same set of foreign players but have got in Shami Ahmed in place of L Balaji.

Hello and welcome to CricketCountry’s live blog of Match no 8 of IPL 2013 between Kolkata Knight Riders and Rajasthan Royals. This is Rajasthan’s first home game. They won their opening encounter against Delhi Daredevils at the Ferozshah Kotla.

Kolkata won their opening game by trouncing Delhi Daredevils at the Eden Gardens. We will be bringing you over-by-over updates of the match held at the Sawai Man Singh Stadium, Jaipur.