Vintage Dale Steyn! Two deadly identical deliveries sends back Bhuvneshwar Kumar and Rahul Sharma and the final wicket off the fifth delivery to bowl out Pune Warriors India for 104. Hyderabad have kickstarted their IPL 2013 campaign with a bang. 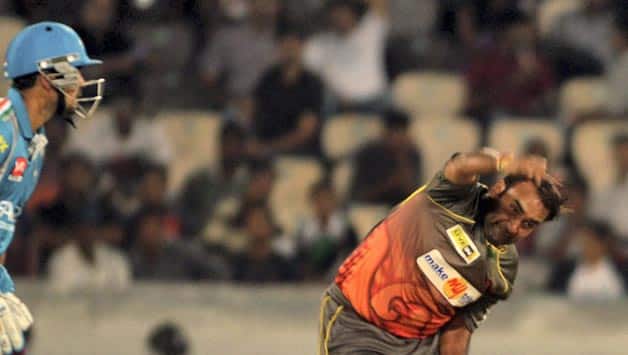 Vintage Dale Steyn! Two deadly identical deliveries sends back Bhuvneshwar Kumar and Rahul Sharma and the final wicket off the fifth delivery to bowl out Pune Warriors India for 104. Hyderabad have kickstarted their IPL 2013 campaign with a bang.

Perera returns and strikes…by running Mitchell Marsh out at the nonstriker’s end. Perera gets a hand to a straight shot from Perera and Marsh is caught outside his crease. Perera gets the important boundary off the very next delivery but Mathews varies his deliveries well to keep him down for the rest of the over. He almost strikes again but Vihari puts down a tough chance at long on. 24 required from 12 balls.

Ashish Reddy gets into the act now! He clean bowls Ross Taylor but gives away a six off the last delivery. Pune still needs 33 off the last three overs.

Amit Mishra strikes again! Abhishek Nayar dances down the track to a wrong one and gives a simple catch to Ishant Sharma at mid-off. The Sunrisers are on course to defend the lowest total in Hyderabad. The asking rate has gone to double figures. It’s the great time to be a Hyderabad fan.

Dale Steyn comes back and gives just six away. Hyderabad are slowly pushing Pune out of this game. Steyn has given just 11 runs so far and still has an over to bowl.

Ishant Sharma returns to bowl a wonderful over, giving away just four runs. The asking rate has shot up. Pune still need 55 off 36 deliveries.

Abhishek Nayar swings at every delivery bowled to him as he goes after new bowler Ashish Reddy. The over fetches the visitors 10 runs. They still need 60 off 42 deliveries. Game on!

Another wicket! The Sunrisers are scripting a wonderful comeback here. Manish Pandey reached out for a wide delivery to give a simple catch to Ross Taylor. Mumbai’s hero from the recently concluded Ranji Trophy, Abhishek Nayar walks in. Pune will expect him to give good support to Taylor who still has the capability to take Pune home.

A great start from Cameron White there. Just  two runs off the 11th over with Pune now needing 77 runs from the last nine overs.

Amit Mishra foxes Yuvraj Singh! Big wicket, this. Yuvraj comes down the track but fails to read the ball that spin away from him, going straight to Parthiv Patel who completes the stumping. It could have been further trouble as Manish Pandey survived a runout chance. With the asking rate going above seven runs an over, Pune could be in for a shocker. Unless, ofcourse, Ross Taylor takes the bowling apart. At the moment, Pune have scored 48 for three in 10 overs and desperately need to get a move on.

Thisera Perera strikes again as Marlon Samuels, who was clearly struggling from the first delivery, poked at a delivery outside offstump to give a regulation catch to Cameron White at slips. A couple of more wickets and the Hyderabad crowd, however little, could be in for a close finish. At the moment however, the focus is on Yuvraj Singh who walks out in a situation that is quite familiar to him.

Amit Mishra has a Dale Steyn-esque start, giving away just two runs as Samuels fails to read the turn and bounce generated by him. Pune still in command to earn all the points from this game, though.

Uthappa was dismissed caught behind after scoring two back-to-back boundaries off Perera to bring Marlon Samuels to the crease.

Uthappa brings up the first six off the Pune innings with a straight back shot off a poor delivery from Ishant Sharma. The over fetches the visitors nine runs as they manage just 27 runs in the powerplay.

Uthappa and Pandey breathe easy as Steyn goes out of attack to make way for Thisera Perera. Even with a poor trackrecord in the IPL so far, Perera does well to give just 5 runs away.

Neither of Pandey or Uthappa have been able to read the bounce and swing so far. But the fielding restrictions has given Uthappa to take the ariel root without the fear of getting caught out. A boundary helped Pune score 8 runs off the over.

Steyn continued to steam in and offered almost nothing. A couple of lovely deliveries shaping away from the right-handed Pandey brought an end to another miserly over.

Ishant Sharma matches Dale Steyn’s efforts to give away just one run as Pune Warriors move to 3 for no loss from two overs.

The Pune Warriors India openers see off Dale Steyn’s first over as they begin their chase of a simple total of 127. They would love to score just two off all his four overs and still chase comfortably.

Hyderabad’s misery at home continues as the Sunrisers Hyderabad managed just 126 runs — their lowest total in Hyderabad. Ashok Dinda finished with figures of two for 29, setting a modest total of 127 for Pune Warriors India.

Bhuvneshwar Kumar strikes to send back Hanuma Vihari who tried to walk across and play a cheeky shot over the fine leg fielder but failed to clear Ashok Dinda who did well to take a sharp catch. Kumar’s spell ends with a single as he finishes with figures of one for 17 from his four overs.

Ashok Dinda makes up for the previous over that costed Pune 15 runs as he dismissed the dangerous Perera. He could have had his second wicket if the long off fielder Manish Pandey would not have dropped a simple catch.

The strategic time out seems to have worked for the homeside as Perera launched scores one four and a huge six over long on to bring up the costliest over of the match so far. Samuels ends with figures of one for 34 in four overs.

Bhuvneshwar Kumar returns to the attack and dishes out a couple of yorkers and denies any sort of width to the big-hitting Perera. Five runs come off the over as we have the second strategic time out!

Marlon Samuels picks Cameron White who failed to clear a slog sweep, giving a straight forward catch to Mitchell Marsh at deep square leg.  Hanuma Vihari joins Perera with the score at 88 for four and just five overs to go.

New batsman Thisara Perera seems to have come out with a simple plan to throw his bat at almost everything. Sharma’s spell ends with 11 runs off his fourth over as he ends with figures of one for 21.

Yuvraj Singh ends Akshath Reddy’s miserable stay in the middle to send him back for 27 off 30 deliveries.

Rahul Sharma’s splendid display continues as he bowls another miserly over to give away very little. He has gone just 10 runs in his three overs. Whoever said, T20 is not for spinners needs to be shown this game right away.

Indian superstar Yuvraj Singh introduced into the attack and Sunrisers continued to toil hard for runs. Three singles and two twos takes the homes side to 67 for two.

Rahul Sharma dealt Sunrisers Hyderabad a mighty blow as he foxed Kumar Sangakkara to break his stumps and send him back to the pavilion. Hyderabad’s slow start was further dented with the skipper’s departure with 9 overs still to play.

The Pune Warriors India head into the strategic time out after taking control of the game so far. Sangakkara continues to be cautious as he deals in singles while Akshath Reddy is looking to free his arms, but to no avail.

Angelo Mathews introduces his fifth bowler — Rahul Sharma into the attack. But, its the same script for the Sunrisers as they continue to deal majorly in singles. All five bowlers have done exceptionally well to bowl a tight line so far. This game is being controlled by the visitors at the moment as the eighth over produces just 4 runs to take the Sunrisers Hyderabad to 50 for one.

Angelo Mathews bring himself on and bowls with good variation as the Sunrisers continue to struggle for runs. Sangakkara ekes out a boundary off the penultimate delivery of the over to take his side to 46.

Ashok Dinda castles Parthiv Patel’s offstump who was clearly frustrated by the lack of room and went for a big swing. His wicket brings skipper Kumar Sangakkara to the middle. Sunrisers Hyderabad have managed just 38 runs in the batting powerplay.

Parthiv Patel scored two boundaries of Marlon Samuels to take the Sunrisers Hyderabad to 32 in five overs. They still need to up the ante if they are to get anything close to a defendable total.

Akshath Reddy, looking to get a move on is lucky to survive as his heave off a slower one from Bhuvneshwar Kumar fell short of Abhishek Nayar at mid-off. Bhuvneshwar contines to keep it tight and does well to offer no room for the batsmen to throw their bat around. Not long before either of the batsmen lose their cool and throw their wicket away. Anothr top over from Bhuvneshwar, giving away just three runs off it.

Parthiv Patel welcomes Ashok Dinda with a glorious shot through covers to pick up his first boundary of the game. The pitch throws up a bit of bounce as Dinda does well to give just eight off the over.

Bhuvneshwar Kumar’s ability to stiffle the batsmen at the crease stays true till the last delivery of the over. After two singles and three dot balls, Bhuvneshwar stays a bit, giving Akshath Reddy an opportunity to free his arms and score a boundary through deep extra cover.

Debutants Sunrisers Hyderabad have started tentatively. Off-spinner Marlon Samuels does well to bowl wicket-to-wicket without giving any room to concede just four runs in the first over.

Pune Warriors skipper Angelo Mathews won the toss and elected to field against Kumar Sangakkara’s Sunrisers Hyderabad in the third match of the sixth edition of the Indian Premier League.

Kumar Sangakkara will hope that the change in team name and ownership will bring his side some luck on their home ground in Hyderabad.

As far as Pune Warriors India is concerned, Angelo Mathews will be under immense pressure to deliver for a team that had Sourav Ganguly at the helm last year.

Hello and welcome to the CricketCountry’s live blog of the Match 3 of the Pepsi IPL 6, between Sunrisers Hyderabad and Pune Warriors India.

This is Prakash Govindasreenivasan and I will be bringing you momentary updates of today’s match at the Rajiv Gandhi International Stadium.