Mumbai Indians scored 166 for eight in 20 overs in the 66th match of the Indian Premier League (IPL) against Rajasthan Royals at the Wankhede Stadium. 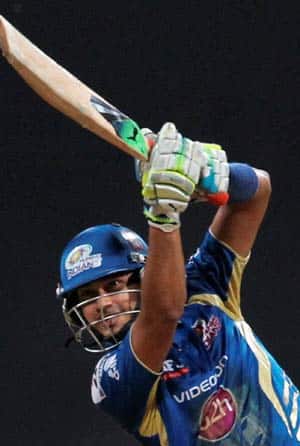 Mumbai Indians scored 166 for eight in 20 overs in the 66th match of the Indian Premier League (IPL) against Rajasthan Royals at the Wankhede Stadium.

Rajasthan picked up wickets at regular intervals which stemmed the flow of the runs. Kieron Pollard (17), Rohit Sharma (14), Ambati Rayudu (7) failed to capitalize after Mumbai’s solid start. For Rajasthan, Shane Watson (2 for 30) was pick of the bowlers. For Mumbai, Aditya Tare top-scored with 59 off 37 deliveries with eight boundaries and one six.

Mumbai walked in with a new opening combination of Glenn Maxwell and Tare. Maxwell showed his intentions right from the outset. He played an ambitious [a reverse sweep] off the fifth ball of his innings off left-arm spinner Ankeet Chavan. Facing his compatriot James Faulkner, Maxwell struggled. A full toss off from Faulkner was the succor ball Maxwell was looking for and he promptly deposited it over long-on for a six.Maxwell got a reprieve off the last ball when a mistimed pull shot went to the third-man where Chavan failed to attempt the catch.

Maxwell hit a couple of sixes off Chavan’s second over: the first one over mid-wicket and the second over bowler’s head to give Mumbai’s innings an impetus.

Watson, Rajasthan’s go-to man dismissed Maxwell in his first over [fourth of the innings] for 23. After Maxwell’s dismissal Tare took over. He smashed his maiden IPL half-century and stitched an alliance of 76 off 51 deliveries with Dinesh Karthik. The feature of the partnership was Tare’s positive approach. His timing was impeccable and the intent to get on top of the bowling came through. Karthik played second fiddle to Tare.

When Karthik tried to open his shoulders against legspinner Pravin Tambe he was dismissed. A slog-sweep was grabbed by Sanju Samson at deep mid-wicket in the 12th over. In the next over Kevon Cooper hoodwinked Tare with a slower delivery. Tare checked his cover drive and was caught at covers by Watson for 59 off 37 balls.

Rohit and Pollard had a solid base to launch the late order surge. Pollard got into his elements when he hit Tambe for a straight six over the bowler’s head. Rohit was dismissed in the 16th over when he top-edged Faulkner and the ball soared high which was pouched safely by Watson.

In an important match to stay contention for top two in the league, Royals decided to bowl. Rajasthan have never lost chasing the target in IPL 2013. Mumbai Indians were planning to bat anyway as told by captain Rohit at the toss. Both the teams have qualified for the playoffs and are tied on 20 points.

Sachin Tendulkar missed the game because of a tendon injury to his right hand. Rohit was unsure about when Tendulkar would make a comeback. Tendulkar’s opening partner, Dwayne Smith, was dropped.
For the Royals, 41-year-old legspinner Tambe and left-arm spinner Chavan were brought in place of Siddharth Trivedi and Vikramjeet Malik.

This is Mumbai Indians’ last home game of IPL 2013; they have won all the seven matches played at Wankhede so far.

Yusuf Pathan’s dismissal should be a lesson for all cricketers, says Allan Donald