They have been unconquered at home so far but Mumbai Indians face an arduous task to extend the record as they face a rampaging Chennai Super Kings in their 49th match of the Indian Premier League (IPL) on Sunday. 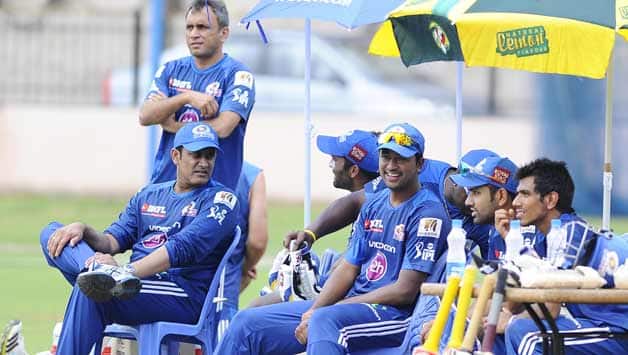 They have been unconquered at home so far but Mumbai Indians face an arduous task to extend the record as they face a rampaging Chennai Super Kings in their 49th match of the Indian Premier League (IPL) on Sunday.

Chennai are coming into the match with seven wins on the trot and they are the only team to have won all their four away games this season, so Mumbai have a task cut out even as they had beaten the same rivals when they met first time.

Both the teams appear to be even on paper with their star-studded line-ups that bat quite deep but on the points table Chennai (18) stand atop following nine wins from 11 games while Mumbai (12) are fourth with six wins.

Mumbai’s three-match winning streak has been snapped with the seven-wicket defeat against Hyderabad in their previous game but their batting appears to be settled and has delivered in the four home games.

They have rattled up huge scores of 209 for 5 against the Delhi Daredevils, 194 for 7 against Royal Challengers Bangalore, 183 for 3 against Pune Warriors, and 174 for three against Kings XI Punjab in home games.

Opener Dwayne Smith has been in good touch, aggregating 194 runs in six matches, with two half-centuries in his kitty.

Batting great Sachin Tendulkar has scored just one fifty this year while amassing 171 runs in 10 games and the local hero would be keen to score big against formidable Chennai.

The middle-order has been the strength for the hosts, with wicket-keeper batsman Dinesh Karthik, skipper Sharma and West Indian all rounder Kieron Pollard being the leading run scorers for them.

The Mumbai captain has registered four half-centuries, scoring 375 runs in 10 matches at an average of 53.57, while the Trinidadian Pollard has struggled in the last two games.

The bowling attack, which boasts of Lasith Malinga and Mitchell Johnson also poses a threat to the opposition, with the duo providing the early breakthroughs.

They have been complemented well by the Indian spin twins Harbhajan Singh and Pragyan Ojha. Sri Lankan Malinga has been able to pick up only six wickets in his eight games while Australian Johnson and off-spinner Singh are the leading wicket-takers for the side, with 12 each.

Chennai Super Kings, on the other hand, have been in destructive form, having remained unbeaten in their last seven games and most recently defeating Kings XI Punjab by 15 runs.

Except the two loses at home against Mumbai and Pune, the two-time IPL champions haven’t put a foot wrong and are almost through to the play offs.

Aussie opener Michael Hussey has been in rich vein of form and has amassed 485 runs in his 10 games at an impressive average of 60.62. He is the second leading run scorer in the tournament after Chris Gayle (505).

Suresh Raina cracked his first IPL century against Kings XI Punjab in the last game, after getting off to good starts.

He scored an unbeaten 100 and the Uttar Pradesh batsman would be high on confidence. He has scored 359 runs in the 11 games at an average of 44.87.

Skipper Mahendra Singh Dhoni and Ravindra Jadeja have relished the job of finishers and have guided the team to victory in most of their games.

The ‘captain cool’ has been in ominous form with the bat, and has scored 300 runs in the 11 matches, while anchoring the middle order.

Haryana medium pacer Mohit Sharma has done reasonably well, picking up 11 wickets in eight matches at an average of 14.81.

The problem of death bowling has haunted Chennai for long and Dhoni has repeatedly said that the team needs to improve its bowling in the slog overs.

In the previous game against Punjab, they conceded 49 runs in the last five overs, despite Bravo giving away only three runs in the final over.