The rampaging Chris Gayle will be the cynosure of all eyes as table-toppers Royal Challengers Bangalore lock horns with Mumbai Indians in the Pepsi Indian Premier League (IPL) at the Wankhede Stadium, Mumbai. 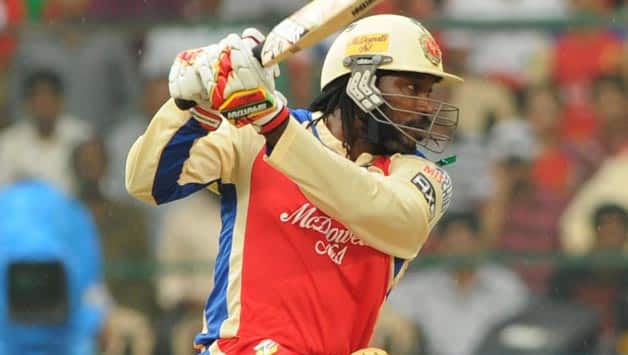 The rampaging Chris Gayle will be the cynosure of all eyes as table-toppers Royal Challengers Bangalore lock horns with Mumbai Indians in the Pepsi Indian Premier League (IPL) at the Wankhede Stadium, Mumbai.

Placed sixth in the points table, it will be imperative for Mumbai to get Gayle early if they are to continue their winning momentum, after the positive result against Kolkata Knight Riders.

For the record, Gayle had smashed his way to the fastest century in the history of T20 cricket in his team’s massive win over Pune Warriors. And the strapping Jamaican has it in him to do an encore once more.

With Gayle in such roaring form, no total can be called safe, and that is why Mumbai would look to score as many as possible.

Dwayne Smith and Rohit Sharma engineered Mumbai to a morale-boosting win over Kolkata in their last away match. But Sachin Tendulkar failed to rise to the occasion on his 40th birthday, and the veteran batsman will look to make up for that in front of a packed Wankhede Stadium.

Tendulkar has managed just 125 runs so far and the veteran will look to score runs at his home ground. Ponting dropped himself from the team in the previous match and it will be interesting to see if the Australian gives this important clash a miss.

The Aussie great has scored just 52 runs in six games at an average of 10.40. The middle-order, comprising of wicketkeeper batsman Dinesh Karthik, last match skipper Sharma and Kieron Pollard, has been the highlight.

Mumbai spent a million dollars on Glenn Maxwell but the Aussie all-rounder is yet to find a place in the playing XI.

Mitchell Johnson has been the pick of the bowlers with nine wickets in six matches and has a good partner in Lasith Malinga, who has scalped five from as many games.

Seamer Dhawal Kulkarni, who took nine wickets in the Ranji Trophy final to help Mumbai to their 40th title, has been a surprise exclusion.

In the spin department, Harbhajan Singh is struggling for form having picked up just six wickets in seven outings at an average of 31.33, while Pragyan Ojha has done reasonably well, picking up seven wickets at an average of 17.42.

On the other hand, Bangalore, especially Gayle, would look to continue from where he had left the other day. He is leading the run charts with 432 runs.

RCB captain Virat Kohli, too, has been in good form with 333 runs, while A B de Villiers has been the perfect foil to both Gayle and Kohli, scoring quick runs towards the end.

Pacers R Vinay Kumar and Ravi Rampaul have been outstanding, especially in the absence of Zaheer Khan.

“It is very difficult to take a bowler out of our combination because every bowler has actually performed. We have got guys like (Abhimanyu) Mithun and Harshal Patel sitting on the side,” RCB coach Ray Jennings has said.

Kumar has bagged 13 wickets in eight matches and had saved the day for his team with a three-wicket haul when these two sides met on April 4, when RCB won by two runs.

Left-arm pacer Jaydev Unadkat has scalped seven wickets in seven matches and Jennings believes the 21-year old will return to the Indian team in 18 months.

Pakistani cricketers intrude into Kashmir in the hope of getting an berth in the IPL!