Hyderabad won by 3 wkts
Man of the Match: Amit Mishra 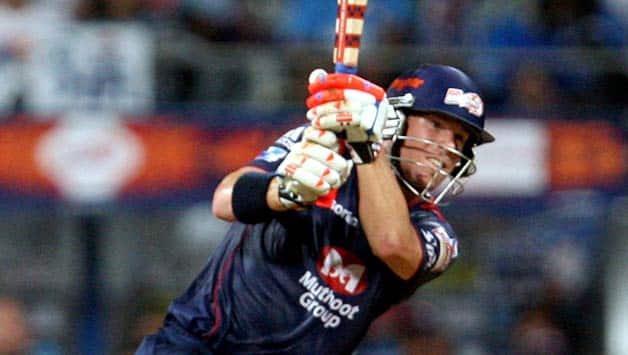 The Delhi side will be bolstered by the possibility of Virender Sehwag’s impending return to the side, after he missed the first three games due to injury.

Daredevils need to get off the mark in the tournament to get their campaign up and running before it gets too late.

In the three losses so far, they have failed to click as a unit. Manpreet Juneja showed great promise in Delhi’s loss to Mumbai Indians and needs to play the role of a consolidator on days when the top order fails to create an impact. Delhi has also struggled to find their fourth foreign player who can have a decent impact in every game. While Jayawardene, Warner and Morkel shoulder as much responsibility as they can, the lack of a strong fourth option is hurting them.

Andre Russell can clear the longest boundary with consummate ease and panache. He also is a useful bowler, but so far has looked out of place.. Delhi have tried Johan Botha and Jeevan Mendis in his place. For now, the place for fourth foreigner is up for grabs.

When they take on the Sunrisers on Friday, their aim should be to restrict the Sunrisers’ batsmen from scoring freely. The Hyderabad side have some issues in their batting and Jayawardene will hope that the bowling unit comprising of Umesh Yadav, Irfan Pathan, Ashish Nehra, Morkel and spinner Shahbaz Nadeem can take full advantage of that.

As for the Sunrisers, they need to sort out their batting frailties at the earliest. Their biggest problem is the over reliance on the foreign players in the side. Despite a good start, the Sunrisers can be in for a rude shock if they do not mend their ways at the top of the order. This game is a good opportunity for them to try a few new combinations at the top and see what works for them rather than persisting with Akshath Reddy and Parthiv Patel at the top, who have failed to score at a quick pace early on.

Thisara Perera has been the most impactful player for this Hyderabad side and he will be crucial against the Delhi Daredevils. Cameron White’s return to form is also a positive sign for the Sunrisers. Despite an off day against the Royal Challengers Bangalore on Tuesday, Hyderabad’s bowling department looks pretty solid.

For the Delhi side, Jayawardene could be tempted to bring Russell back into the side after Jeevan Mendis’ performance against Mumbai was below par. For the Sunrisers, a change in the batting order could perhaps augur well.

The Delhi Daredevils are currently languishing at the bottom of the table while the Sunrisers are enjoying early success.When the two sides meet in Delhi, the home side will be under tremendous pressure to open their account while the Sunrisers would look to shrug off their previous defeat and pile on further misery on the Delhi Daredevils. Virender Sehwag’s return however, could give a massive boost to the home side and improve their chances of their first win.