Kings XI Punjab will be playing hosts to Kolkata Knight Riders in the 20th match of the Indian Premier League on Tuesday at Mohali.

Punjab won by 4 runs
Man of the Match: Manpreet Gony 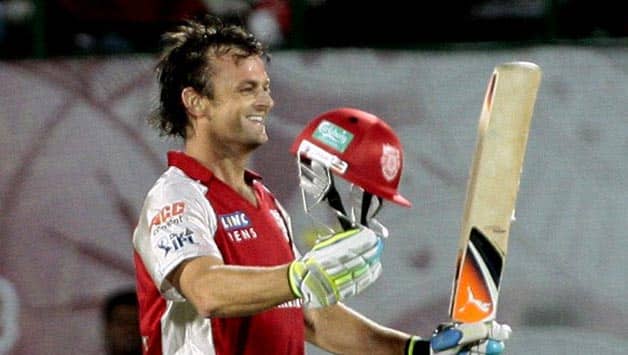 Adam Gilchrist needs to make an impactful knock and if he gets going for Kings XI Punjab, the hosts will certainly get their campaign back on track © AFP

Kings XI Punjab will be playing hosts to Kolkata Knight Riders in the 20th match of the Indian Premier League on Tuesday at Mohali.

Both the sides had have contrasting results in their respective encounters on Sunday. While Kolkata Knight Riders trounced hapless Sunrisers Hyderabad by 48 runs, Kings XI Punjab lost to Rajasthan Royals by six wickets.

Punjab have a lot to ponder about, especially after the lackluster batting in their previous two encounters. The top-order has not really made any impact in the previous two matches. Mandeep Singh and Manpreet Juneja showed a lot of promise in Punjab’s first match against Pune Warriors India. Mandeep was out hooking Nannes against Chennai Super Kings; on a seaming wicket at Jaipur, he played  a rash shot in the second over and was caught at third man. Mandeep needs to bide his time and give himself an opportunity to score big runs.

One just cannot rule out the possibility of an impactful knock from captain Adam Gilchrist. He has immense run hunger and if he gets going Punjab will certainly get their campaign back on track.

Gilchrist might want to bring in David Miller in order to bolster Punjab’s batting at the expense of Ryan Harris. Harris did not have any impact against Chennai and Rajasthan. He has spearheaded the attack and Punjab have been let down by lackluster form. David Hussey will play an important role in the middle-order. Azhar Mahmood is the seasoned campaigner and Punjab would be expecting him to fire. He might come in ahead of Gurkeerat Singh Mann and Rajagopal Sathish. The two young Indian batsmen need to put their hands up and contribute at this crisis hour.

Praveen Kumar’s initial burst with the new ball becomes important since Mohali track offers some lateral movement. Immaculate line and length have been features of his bowling. Piyush Chawla’s four over spell in the middle could prove to be important since he has the role of containing the batsmen and picking up wickets as well.

Parvinder Awana is working up good pace and on a wicket where fast bowlers have something for them, his spell will be decisive. Mahmood, the veteran, is vital cog in the bowling department.

Kolkata will be confident after they annihilated Sunrisers Hyderabad at Eden Gardens. But they will have to make transition from the slow Kolkata surface to a fast-paced Mohali track.

Sachithra Senanayake could make way for Brett Lee. Brendon McCullum might have to miss out especially after Jacques Kallis’ all-round performance (41 and three for 13) against Hyderabad. Eoin Morgan is also among runs and has been the game-changer for Kolkata.

Gautam Gambhir’s stability at the top is a comforting factor. Manvinder Bisla had a decent outing against Hyderabad. Some of his shots on Sunday were akin to the IPL 2012 final where he single-handedly won Kolkata the title. Yusuf Pathan is due for a big knock and might have to use the long handle if his team gets to a good start with the bat.

Kallis’ bowling form gives Kolkata a lot of hope. It is certain that Lakshmipathy Balaji will play ahead of either Mohammad Shami or Pradeep Sangwan.

Sunil Narine is the attacking option Kolkata have in their ranks. Gambhir has used him judiciously; his mystery deliveries confound the batsmen in the death overs.

All in all, Kolkata seemed to have the right balance and form to topple Punjab. But Punjab on their day can topple any side in the competition. Punjab would want to befriend consistency else their aspiration to reach the knockout stages of the competition might be nipped in the bud.