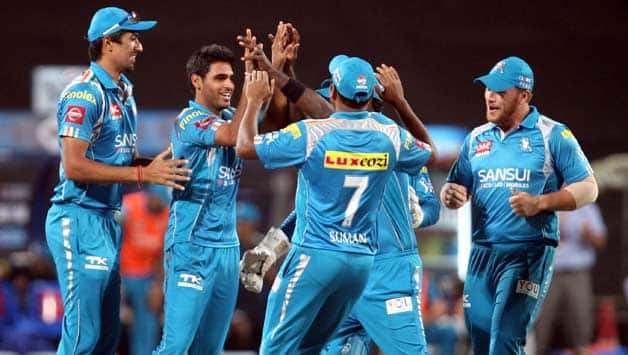 The Pune Warriors India showed signs of finding their feet in their match against Kings XI Punjab, only to be beaten by a splendid effort with the bat from young Mandeep Singh and South Africa’s David Miller. Despite their fifth loss of the season, Pune will be hoping to put up a fight against Bangalore.

His bowling efforts were not that great but Luke Wright is a find for the Pune Warriors and will be a vital cog for them in the rest of the season. He scored 34 off just 10 deliveries against the Kings XI Punjab to take his side to a good total.

Pune might retain the same eleven against a strong line-up of the Royal Challengers Bangalore with new skipper Aaron Finch leading from the front. Ajantha Mendis, who went for 38 runs off his four overs, will be expected to perform better and could be thrown into action during the Powerplay overs with Chris Gayle to bowl at.

Bangalore continues to be the best side in the league stages, despite lacking clinical consistency. Their previous win, however was a result of a splendid all-round performance. They will hope to take that into the game against Pune Warriors.

The M Chinnaswamy stadium has been a fortress for the Royal Challengers Bangalore as they are yet to concede a game in that venue. They will look to keep their home record intact when they host the Pune.

For the visitors, Aaron Finch, Robin Uthappa and Steve Smith need to play out of their skins to counter Bangalore’s line-up of fast bowlers on a seamer-friendly track. Another blinder from Luke Wright could do the Pune Warriors a world of good. In the bowling department, Ashoke Dinda and Bhuvneshwar Kumar need to use the wicket well and keep the Bangalore side to a low total.

Bangalore side will go into this game as favourites to bag the two points at the end of it. There seems to be a balance in every department for them. With proven match winners like Virat Kohli, Chris Gayle and AB de Villiers on their side, Bangalore poses a major threat to a struggling Pune side.

Unless, Pune put on an unbelievable display of cricket, it seems a herculean task to beat the Virat Kohli-led side. Yet, it’s hard to rule them out after their never-say-die attitude against the Kings XI Punjab. If Pune can exert relentless pressure, they are capable of giving Kohli’s side a run for their money. The first of the two Sachin Tendulkar desert storms