The Sunrisers Hyderabad will look to get back to winning ways at home when they travel to Mohali to face Adam Gilchrist's Kings XI Punjab. The Sunrisers Hyderabad will look to get back to winning ways when they travel to Mohali to face Adam Gilchrist‘s Kings XI Punjab.

The Hyderabad side’s unbeaten run at home was thwarted by the Chennai Super Kings. They triumphed in multiple low-scoring encounters but failed as a unit against the mighty Chennai side in their previous fixture. As for Punjab, they still would fancy an outside chance of making it to the playoffs and need wins from all their remaining fixture to achieve that. With a home game against Hyderabad, they will hope to register a win.

Both sides have faltered at the wrong time and find themselves in a tight position as they chase a top four spot. Among the two, the home side is in a better position with 14 points from 12 games while Kings XI Punjab have 10 from 12 matches. With the Chennai Super Kings guaranteed a top four spot, Mumbai Indians and Rajasthan Royals also in a commanding position to finish at the top, the race is between the Virat Kohli-led Royal Challengers Bangalore and the Sunrisers Hyderabad (both are on same points) with Kings XI Punjab with an outside chance of leapfrogging both these teams.

Bangalore’s remaining fixtures are relatively easy which adds to the pressure on the Sunrsiers. A victory over Kings XI Punjab could help them regain momentum. Punjab, on the other hand, will look to win and hope that Bangalore falter.

The previous fixture saw Hyderabad suffer an off day with the ball. While Dale Steyn was still economical, the likes of Amit Mishra and Ishant Sharma went for a lot of runs. Sharma’s figures of none for 66 were the worst in the history of the tournament. However, it was a one-off day and they will be looking to shrug it off and get back to rhythm. On a pacer-friendly wicket at Mohali, Steyn could have a major impact. His ally Ishant Sharma will also hope to put his poor performance behind and hit the deck well to trouble the Punjab batsmen. Its a crunch tie and Shikhar Dhawan will be expected to shoulder the responsibility at the top. Parthiv Patel displayed some good batting in the loss against the Chennai Super Kings and if he gets going again, there would be lesser pressure on the likes of Sangakkara, Darren Sammy and Thisara Perera.

Kings XI Punjab’s strength will lie in their batting. Gilchrist will hope to see the likes of David Miller and Shaun Marsh take the attack to the Hyderabad bowlers from the outset. Gilchrist would like to shoulder the responsibility of performing well at the top. He started well in the match against the Rajasthan Royals but couldn’t bat till the end.

Both these sides are in desperate need of a win to save their sinking ship as both are coming in with a loss in their previous fixture. The return of Gilchrist bolsters Punjab but on a bowler-friendly wicket against the best bowling unit of the tournament, it will be interesting to see if the 41-year-old can have an impact. Despite the heavy loss to Chennai, the Sunrisers Hyderabad will go in as favourites in this one. 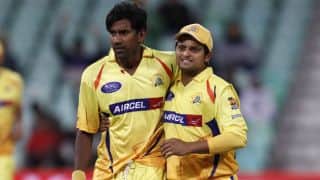