Harbhajan Singh took three wickets and was involved in two more dismissals, before a late cameo from Dishant Yagnik took the Rajasthan Royals to a competitive 165 for six against the Mumbai Indians in the second Qualifier of the Indian Premier League (IPL) at Eden Gardens. 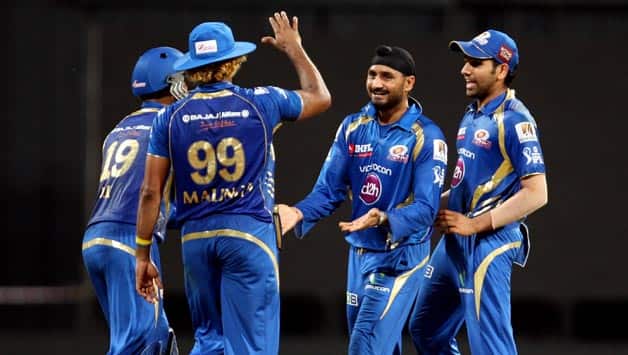 Harbhajan Singh took three wickets and was involved in two more dismissals, before a late cameo from Dishant Yagnik took the Rajasthan Royals to a competitive 165 for six against the Mumbai Indians in the second Qualifier of the Indian Premier League (IPL) at Eden Gardens.

After heavy rain in the evening threatened to disrupt the match earlier, the weather finally permitted a 9pm start and the full quota of 20 overs per side. Rajasthan skipper Rahul Dravid won the toss and decided to bat first, with the thought of putting up as many runs on the board in case of a Duckworth-Lewis situation.

Dravid stepped out to open the batting with Ajinkya Rahane, and looked confident as he drove Mitchell Johnson through the covers and past mid-off, before flicking him off his pads to get three boundaries in the Australian’s first two of overs. Some words were exchanged between the two, and even Dravid, usually the calm and restrained one, did not hold back.

The Royals took 42 runs from the Powerplay overs without damage and looked set for a big one, as Mumbai chose to take the first timeout. The break in momentum worked for MI as Rahane stepped across his stumps and tried to sweep Harbhajan Singh in the seventh over, but showed too much of his stumps to the offie and had his furniture dislodged.

Harbhajan struck in his next over as well as Shane Watson played a loose sweep and found the leading edge that was lapped up easily at mid-wicket. Young Sanju Samson then let the occasion get the better of him and played another loose shot to give Harbhajan an easy catch and Lasith Malinga his first wicket.

Stuart Binny then launched a mini counterattack of his own before Dravid gave Harbhajan his third wicket with a flick straight to mid-wicket. Rajasthan took the second timeout at the end of the 15th over, with the score on 104 for four, still left with a chance to cross 150 which would be a very good total to defend.

However, Binny was to become the next victim of the timeout as he succumbed to Kieron Pollard’s slower one and holed out to Harbhajan at extra-cover. Kevon Cooper hit a boundary off his first ball, before lobbing Pollard straight down the throat of Dwayne Smith at deep mid-wicket to make it an all West Indian affair.

At 110 for six with just four overs left, the Royals looked down and out. However, wicketkeeper-batsman Dishant Yagnik and the experienced Brad Hodge did not loose hope and aimed to get two boundaries in an over, eventually taking 61 off the last 24 balls.

The duo were helped by some innovative batting from Yagnik, who on one occasion stepped behind and wide off his off-stump and flicked Malinga over square-leg for four. The Sri Lankan slinga was guilty to two howlers in the final over — slipping out huge wide balls that gave seven extra runs and two more deliveries to the opposition.

The pitch looks like a batting paradise, but Mumbai have their task cut out if they want to make the finals.