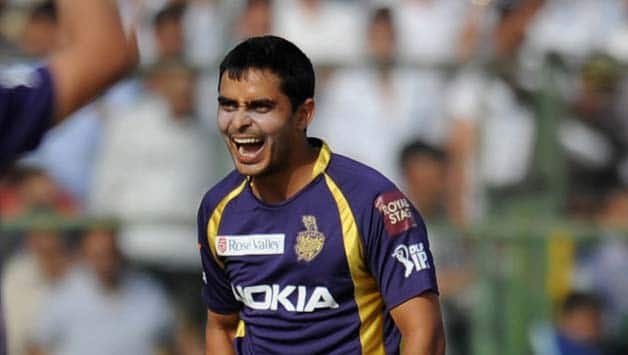 “We are the champions. Instead of us, the other team should feel the pressure when they are playing against us. We are enjoying and we are trying to give our best. The pressure should be on the opposition. [If] we play to our potential the pressure will be on them,” Bhatia was quoted as saying by the official Indian Premier League website.

Bhatia bowled consistently well last year and has played a crucial role in KKR’s win. However, he believes nothing is predictable in Twenty20.

“Twenty20 is a funny game, one day you become a champion and the next day you could be back where you started. It is very unpredictable. One day you might get hit for runs and next day you might bowl a brilliant spell. It is not only about the performance, it is sometimes about how much support you are getting from the other end. Sometimes there is pressure on the batsmen when they are facing Sunil Narine and they try to go after me and they lose wickets so these are the things which matter most. When he is bowling from the other end I always feel that he can change the game around and then when the new batsman comes I can finish my spell. That’s what I did last year and I am trying to do.”

On being asked how crucial is an all-rounder’s role in T20, Bhatia said, “It depends of what is the requirement of the team. If KKR is looking at me as a bowler and I have to make sure that I perform as a bowler. In batting, the position I normally bat on I don’t get more than 6-7 balls or sometimes two-three overs. So that’s how I play and perform the role.”

The 33-year-old has a different take on how to handle pressure during crunch situations.

“I think it is because I have played so many domestic games, I have played so many IPL games and most of the time when there is pressure and you do well, you get a lot of confidence and so whenever there is some kind of pressure you remember those innings or those spells where you did really well. That is what I do, I normally remember my past innings and past performances which helps me. And that’s one of the reasons why sometimes when there is a pressure situation I try to handle it in a better way than I used to.”

Bhatia has seldom been able to get crucial breakthroughs for KKR.

He says, “I know my limitations. I know that I don’t have that kind of pace. I know that the batsman is going to go after me and at some stage if I am very clever then I will get the wicket, so that is what I do. I play within my limitations. I don’t try to bowl a bouncer and I don’t try to bowl at extra pace. I always take away the pace from the ball and that’s the trick that is actually what is giving me wickets. And I hope to continue and feel that I should be cleverer when I am playing on wickets which are actually a batsman’s paradise, and the batsman can just go there and hit wherever you want. So more the challenge the more careful I have to be.”

“I work on bowling leg-cutters and off-cutters and I have just come out with a different kind of slower one. I just keep practicing in the nets and try to gain confidence. I try to bowl more to those batsmen in our team who are difficult to bowl to. I try to bowl to Gautam [Gambhir], Yusuf [Pathan] and I bowl to [Jacques] Kallis and I try to see and find out what are the balls which they are finding difficult to hit and I try to repeat them in the match. So that’s what I am doing. I am just doing my homework.”

As a young school boy, Bhatia used to follow Venkatesh Prasad’s bowling action. However, with time he realised Prasad’s particular action won’t work for him.

“This kind of ball I started bowling when I was in school. I used to watch Venkatesh Prasad doing it but because Venkatesh Prasad’s action was very straight, his right hand used to come very close to the ear and when I was young the same thing happened with me. But as I got older and realised that [particular] slower one is not going to work and I tried to change that. I saw my own recordings and I discovered what I should be bowling. And it is a matter of pace also. My maximum pace is actually around 120kph so change in pace always has to be in such a way where the ball should grip or the batsman should find it difficult to time the ball. These are the things which I normally do.”

On being asked whether playing plenty of domestic cricket helps him get a clear understanding for IPL, he said, “The more domestic cricket you play the more experience you get. In IPL it is not only the overseas player who you will be bowling to most of the time (but), you also bowl to the domestic guys who have already played against you. So you have to be very careful and watchful about what they are doing when they are playing against you. The more you play the more you know about them so that’s how it helps.”

Bhatia, who was the skipper of Delhi in the just concluded season, led his team to win Vijay Hazare Trophy.

“I got this opportunity to captain the Delhi side in the [domestic] one-dayers. Last year we had lost in the semi-finals, so I wanted us to do better this year and that’s what we did. We really practiced hard, we did our homework and thanks to Gautam [Gambhir] being available, he played the last three games which were the knock-outs. When the responsibility comes sometimes what happens is the more the responsibility, more the pressure and that improves your concentration, because more pressure sometimes makes you more confident.”

“I still have to contribute a lot in the IPL with the bat. In domestic when I play for Delhi I have played a few of those innings when the team is struggling but in the IPL I have not been able to contribute. May be because I am not the kind of batsman who can go and hit, or maybe I have to develop these skills so I am practicing in the nets. If I play seven or eight balls I try to do as good as I can. So I hope [I can do it]. I have to give a lot in batting,” he concluded.

IPL 2013: Muttiah Muralitharan felt it was anybody’s game in the Super-Over against Sunrisers Hyderabad