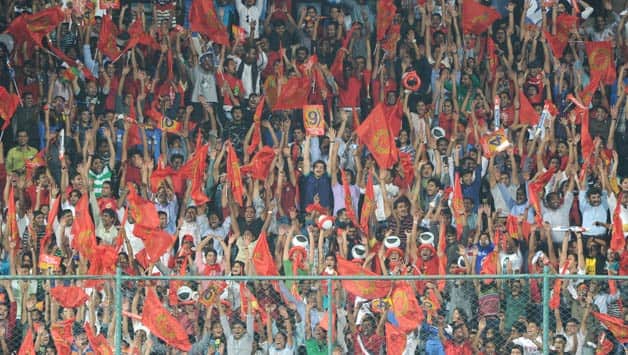 Chasing an imposing 107-run target in eight overs, CSK could post only 82 runs for six wickets after RCB’s seamer Zaheer Khan ran through its top and middle order to pick four wickets in two overs for just 17 runs.

“It’s a sweet revenge for the home team (RCB) as it lost to CSK on the last ball in Chennai last month (April 13) after its pacer (RP Singh) bowled a no-ball in a close match,” Ram Murthy, a college student, told IANS after the truncated match ended on a high note.

Though heavy rains delayed the match by three hours late Saturday, about 15,000 fans waited patiently to watch a must-win game for RCB, as the two valuable points it secured put them in the reckoning for a berth in the play-offs along with Sunrisers Hyderabad, which also has 18 points from 15 games.

“No regrets for waiting till past midnight in the floodlit stadium to see RCB beat CSK and grab the two must points for a chance in the play-offs though its prospects depend on the outcome of Sunrisers’ last tie against Kolkata Knight Riders (KKR) in Hyderabad late Sunday,” Salim Ali, a sales executive, said, rushing out of the stadium.

IPL 2013: Adam Gilchrist leaves behind a rich legacy as a leader