When approached by a Zee Media reporter, Dhoni refused to answer any questions. Bookie Uttam Jain alias Kitti has named Dhoni and Suresh Raina in connection with IPL spot-fixing and betting when confronted by Trichi Railway SP Sampat Kumar, informed the Mudgal report.

The committee, investigating spot-fixing and betting in the IPL, reported that a journalist, who was apparently connected with recording of tapes for a sports magazine, could identify the voice of the Indian player and he had also stated that the player was part of the team which played the World Cup and a member of the team now.

“The journalist refused to disclose the names of the Indian players involved. In spite of repeated requests to put the name of the said player in a sealed cover for perusal before the Supreme Court, the journalist appeared terrified and was very reluctant to do so and pleaded that it would be dangerous for the journalist concerned,” it said.

with inputs from agencies 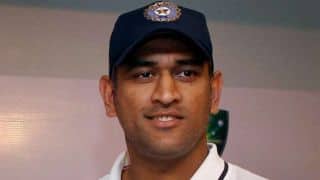