Chief Metropolitan Magistrate Lokesh Kumar Sharma turned down the plea of Special Cell of Delhi Police for the custody of arrested cricketer S Sreesanth saying he cannot be held liable for what has happened at his back. 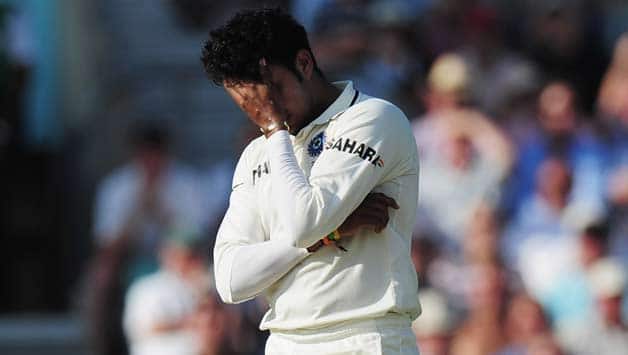 S Sreesanth (above), Ajit Chandila and three other bookies were sent to judicial custody till June 4 © Getty Images

Chief Metropolitan Magistrate Lokesh Kumar Sharma turned down the plea of Special Cell of Delhi Police for the custody of arrested cricketer S Sreesanth saying he cannot be held liable for what has happened at his back.

“Admittedly, Sreesanth cannot be held liable for instances at his back. I am of the considered opinion that it would amount to injustice to the accused,” the court said on the police argument that immediately after his arrest, his hotel room was cleaned up and some articles were removed.

“How will you [investigators] establish that the removed articles belong to Sreesanth as anyone can plant to falsely implicate him,” the court said. It also sent Chandila and two bookies Ashwani Aggarwal and Chandresh Patel to judicial custody after the police said they were no more required for custodial interrogation.

The court also pulled up the investigators for not showing any fresh ground to take the custody of Sreesanth, saying as to why he should be handed to “your hospitality” for two days.

Arrested cricketers S Sreesanth and Ajit Chandila besides two bookies were today remanded in judicial custody till June 4 by a Delhi court which rejected the investigators’ plea for two more days of custodial interrogation of the Indian pacer in connection with the IPL spot-fixing scandal case.

The court dismissed the bail plea of Rajasthan Royals player Ankeet Chavan, while the bail of Sreesanth will be heard on June 4.

During the course of arguments, Senior Public Prosecutor Rajiv Mohan informed the court that interception of various calls suggested that several big names may be involved in the episode as calls were made to underworld don Dawood Ibrahim.

The police said there are some missing links and they are working on it.

“We are missing the link of the whole episode which will be proved very soon,” the prosecutor said, adding, “Some big names are also involved which I cannot disclose at this stage and they were in regular contact with D company.”

While seeking custody of Sreesanth, the prosecutor told the court that Abhishek Shukla has joined investigation and he allegedly had cleaned the cricketer’s hotel room immediately after his arrest.

He also said that Sreesanth has to be confronted with Shukla who might have removed the electronic gadgets and data kept in the cricketer’s room and at pacer’s instance Rs 5 lakh have to be recovered as his friend Jiju Janardhan had taken Rs 10 lakh on his behalf.

The police told the court that the bills of the parties thrown by Sreesanth were paid by Abhishek Shukla as his [Shukla’s] PAN card number was mentioned on the bills.

Senior advocate Rebecca John, appearing for Sreesanth, opposed the plea for police custody saying it is completely unjustified after he being interrogated in its custody for 12 days. She said the grounds of police custody are “so completely untenable”.

She also said the police theory that some articles were removed from Sreesanth’s hotel room was also untenable as the room was unattended for three days and it was Mumbai Police which had later recovered a laptop from his room.

Meanwhile, the court directed the Tihar Jail authorities to produce accused Ashwini before a Mumbai court, which had issued production warrant against him. It also said that he should be brought back before June 4.

Delhi Police has so far arrested 22 accused in connection with the spot fixing scandal case and except four bookies all others are in judicial custody.

Sreesanth, Chavan and Chandila, who were playing for IPL’s Rajasthan Royals franchise, were arrested in Mumbai by Delhi Police for their alleged involvement in spot-fixing in IPL matches for payments of up to Rs 60 lakh just for giving away pre-determined number of runs in an over.

These three players, who have been suspended by the BCCI, and the others arrested have been booked under section 420 (cheating) and 120-B (criminal conspiracy) of the IPC.

On May 21, the police had informed the court that section 409 of the IPC, which deals with criminal breach of trust and entails a maximum of life imprisonment along with fine, has been invoked against all the accused in the case.

The police had said they had added section 409 IPC as the agreement concerning IPL is a tripartite agreement between BCCI, Rajasthan Royals and the player and the agreement was an exclusive contract.