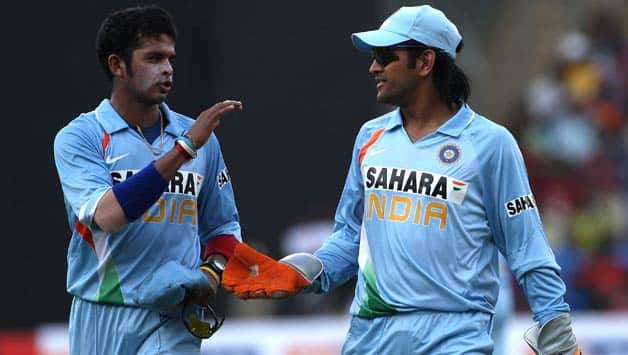 S Sreesanth’s father criticised MS Dhoni (right), stating that the Indian skipper had threatened him that he would never be taken back in the Test side © Getty Images

S Sreesanth’s father Shanthakumaran Nair has defended his son and blamed Indian skipper MS Dhoni and off-spinner Harbhajan Singh for spoiling the fast bowler’s reputation.
“Since he spoke against Harbhajan on Twitter, they had decided to take him out,” his father was quoted as saying by Malayala Manorama.
Sreesanth had a uncomfortable relation with Harbhajan after the latter was accused of slapping the fast bowler during an Indian Premier league game between Mumbai Indians and Kings XI Punjab. Ever since India won the World Cup, Sreesanth hardly managed to find his spot in the Indian squad.
His father criticised MS Dhoni and said “Dhoni had threatened him that he would never be taken back in the Test side.”
Earlier on Wednesday night, the special cell of the Delhi police arrested Sreesanth from his friend’s place in Mumbai while the other two cricketers were arrested from the team hotel [Trident] at Nariman Point for their alleged role in spot-fixing.
Read more stories on IPL 2013 spot-fixing controversy