As the business end of the tournament approaches Indian Premier League has found three qualifiers and the tussle for the fourth spot intensifies. Sarang Bhalerao looks at the possible scenarios for qualification. 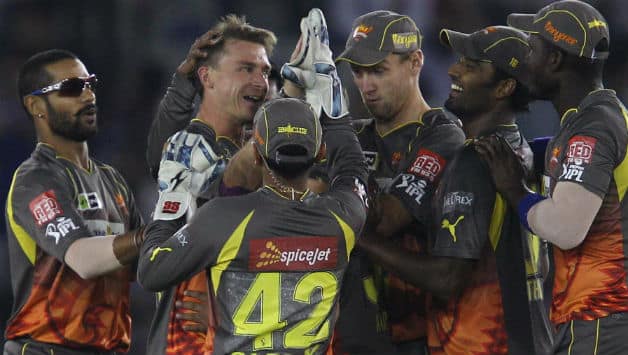 As the business end of the tournament approaches Indian Premier League has found three qualifiers and the tussle for the fourth spot intensifies. Sarang Bhalerao looks at the possible scenarios for qualification.

After the conclusion of matches on Tuesday (May 14, 2013), Chennai Super Kings, Rajasthan Royals and Mumbai Indians are through to the playoffs, albeit their positions can change after the round-robin matches. The spot for the fourth semi-finalist is still wide open. There are a lot of scenarios possible at this point. Let us analyse the chances each of the four teams: Royal Challengers Bangalore, Sunrisers Hyderabad, Kolkata Knight Riders and Kings XI Punjab have for the qualification.

Royal Challengers Bangalore can take solace from the fact their home record is very good albeit their loss against Kings XI Punjab at home puts them in a quandary. They have 16 points and a win against Chennai Super Kings would almost guarantee them a place in the next round.

A loss would then open up a lot of avenues for the other teams. If Sunrisers Hyderabad win none of their remaining matches, Bangalore will surely qualify courtesy of a good net run rate (NRR).

Kolkata Knight Riders and Kings XI Punjab can register a maximum of 16 points. But for the NRR to improve they have to win by very big margins.

Sunrisers Hyderabad are at par with Bangalore in terms of points at this point. If Hyderabad win both their games they are certainly through to the next round.

If Sunrisers win one of their final two games, they will be on 18 points. If Bangalore wins against Chennai then the qualification will boil down to the NRR. At this point Sunrisers have a NRR of -0.117 while Bangalore has NRR of +0.387. So the chances are that in case of a two-way tie, Bangalore will in all probability qualify for the playoffs.

A loss in both the games will eliminate them and will open avenues for Kings XI Punjab (considering their positive NRR) and Royal Challengers Bangalore (who have the best NRR amongst the four teams).

Kings XI Punjab is still in the hunt for the playoffs. For that to become a reality, they have to win their last two games by big margins. Their NRR is positive (+0.046) yet less compared to Bangalore (+0.387) who are on 16 points.

Bangalore and Hyderabad have to lose their remaining games. Assuming that both the aforementioned teams lose by a fair margin the NRR is bound to drop. Punjab’s fate is not in their hands. They can win by big margins and hope that some of the results go their way.

Kolkata Knight Riders still have an outside chance after their victory over Royal Challengers Bangalore at home (Ranchi).

Kolkata have to win their remaining two games and hope that Sunrisers and Bangalore do not win any of their games. If Punjab wins all their games we would have a four-way tie for the final spot. But if Punjab fails to win either of their matches, Kolkata will compete with only two other teams.

Kolkata’s biggest problem is their NRR (-0.044). Bangalore’s NRR (+0.387) is way above Kolkata’s. Kolkata have to make up a lot of ground in the remaining games.