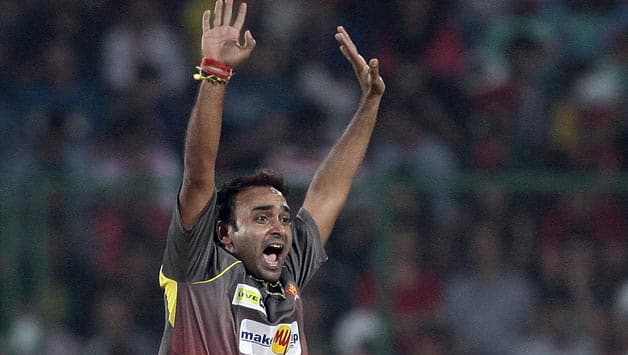 # Kedar Jadhav (30 not out off 20 balls) has posted his second highest score at the IPL — his highest being an unbeaten 50 off 29 balls against Bangalore at Bangalore on March 25, 2010.

# Kumar Sangakkara, with 82 runs (ave.20.50) in four innings, is the leading run-getter for Sunrisers Hyderabad in the present competition.

# Vihari is the only one to have averaged 21 or more in four games for Sunrisers Hyderabad — 76 in four innings (twice not out) at an average of 38.00.

# Delhi Daredevils (114 for 8) have posted the third lowest total in the present competition — the lowest is 99 for nine by Pune Warriors against Kings XI Punjab at Pune on April 7, 2013.

# Sunrisers Hyderabad have become the second team after Bangalore to record three wins in four games this year.

# David Warner has posted his fourth duck for Delhi Daredevils at the IPL. Virender Sehwag holds an unwanted record, having recorded five ducks for Delhi.

# Warner is the leading run-getter for Delhi, totalling 159 at an average of 39.75. He is the only one to record two fifties for Delhi this year.

# Dale Steyn became the second bowler after Irfan Pathan (vs Mumbai) to bowl a wicket-maiden over in the current tournament, his victim being David Warner.

# With six catches, Cameron White is the leading fielder in the IPL 2013.

# Amit Mishra has got his fifth Man of the Match award in the IPL.