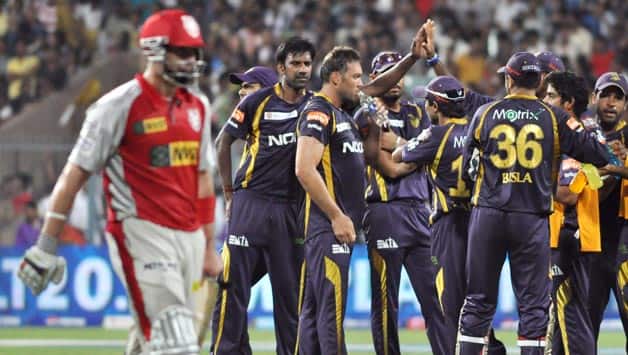 # Azhar Mahmood‘s tally of 11 wickets at 19.09 runs apiece in seven matches is the highest for Punjab in this IPL.

# Adam Gilchrist and Mandeep shared a stand of 45 – the highest opening partnership for Punjab at the IPL 6.

# Manvinder Bisla (51 not out off 44 balls) recorded his third fifty at the IPL.

# Kolkata Knight Riders’ convincing six-wicket victory is their sixth in eleven games against Kings XI Punjab at the IPL.

# Eoin Morgan‘s aggregate of 236 (ave. 33.71) in eight matches is the second highest for Kolkata in the present competition, next only to Gautam Gambhir’s 294 at an average of 36.75 in eight matches.

# Gilchrist has become the fifth player to complete 300 boundaries at the IPL. He has joined Chris Gayle, Gautam Gambhir, Suresh Raina and Virender Sehwag.

# Yusuf Pathan‘s fifth duck at the IPL is his first golden duck.

# Bisla and Morgan were associated in a stand of 72 for the fourth wicket – Kolkata’s highest against Punjab at the IPL.

# Sunil Narine (4-0-22-0) could not claim a wicket against Punjab for the first time at the IPL. In his first three games against them, he had taken 10 wickets.