Sunrisers Hyderabad made life extremely difficult for themselves in a paltry chase of 115 against Delhi Daredevils, but eventually made it, reaching 115 for seven with four balls to spare to hand the Daredevils their fourth consecutive loss. 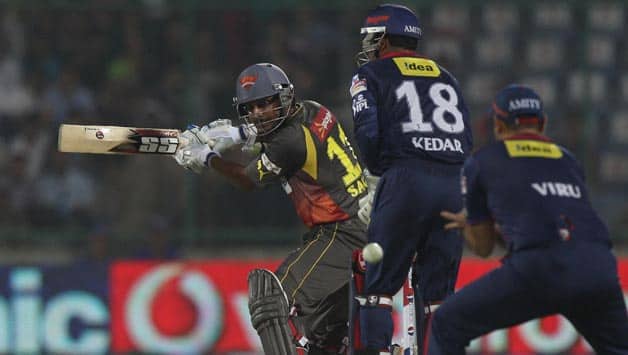 Sunrisers Hyderabad made life extremely difficult for themselves in a paltry chase of 115 against Delhi Daredevils, but eventually made it, reaching 115 for seven with four balls to spare to hand the Daredevils their fourth consecutive loss.

The Sunrisers made heavy weather out of what should have been a stroll in the park on this pitch. They suffered an early blow when Akshath Reddy (1) was run out in the first over by a superb throw from mid-wicket by Shahbaz Nadeem.

The more experienced duo of Parthiv Patel (19) and Kumar Sangakkara (28) combined to put on a run-a-ball 44 before Parthiv’s over-enthusiasm got the better of him. The diminutive left-hander looked to flick left-arm spinner Shahbaz Nadeem off the legs, but was too early into the shot and found the leading edge that was lapped up willingly by the bowler.

Skipper Sangakkara fell to Johan Botha eight runs later as he edged to Virender Sehwag at first slip to make it 54 for three at the end of the 11th. With Twenty20 specialists such as Cameron White, Thisara Perera and Hanuma Vihari still there, one would have still fancied the visitors.

Suddenly, the equation read 39 to win off 30 balls with just five wickets in hand. The big-hitting Thisara Perera was still at the crease. Delhi, who had begun sniffing an unlikely victory, knew that if they got him, they could make a game of this.

Ashish Reddy relieved a few nerves by hitting consecutive boundaries off Umesh Yadav in the 16th over to make it 26 to win off the last four. The youngster, however, got a little too carried away in the next over as he went to sweep Morne Morkel down the leg and lost his stumps. It was as if the Sunrisers were just hell-bent on making a humdinger out of the match.

Amit Mishra came in at No 8 and heaved Morkel’s slower one for four down mid-wicket; eighteen runs needed off as many balls. Perera, who had faced just two balls in 27 minutes as the wickets fell around him, let his impatience get the better of him as he went to lift Irfan Pathan over long-on. However, Perera’s shot was not powerful enough to beat Botha stationed at the rope. Twelve to win from as many balls, three wickets in hand.

Mishra squeezed in a boundary in the second-last over bowled by Umesh Yadav and finally it was down to six to get off the last over. In the end, it was up to Steyn to come to his team’s rescue again, this time with the willow. The best bowler in the world showed that he is no mug with the bat as he sliced a couple to point before lashing a straight drive for four to get Hyderabad their first away win of the tournament.

There was an electric buzz around the Feroze Shah Kotla before the game began, as their dashing favourite Virender Sehwag was expected to play after recovering from a back sprain. Captain Mahela Jayawardene let the cat out of the bag at the toss, revealing that Sehwag would be replacing the struggling Unmukt Chand, who has been dismissed for two ducks so far.

A Virender Sehwag-David Warner opening partnership was the stuff of dreams and it was something Delhi had been waiting for, after their three unsuccessful openings with Chand at the top. However, it made no difference to a rapid-fire Dale Steyn who ensured that Delhi’s opening batsmen’s romance with ducks continued. David Warner perhaps did not expect such pace from Steyn as he tried to swing him to the boundary, at his own peril. The ball took the edge and looped to mid-on where Anand Rajan took an easy cach.

Jayawardene walked in to a familiar setting, with his team one down for no runs. The Sri Lankan set things straight by delightfully flicking Ishant Sharma for six over mid-wicket to get Delhi going. Sehwag, meanwhile, lashed out at a wide delivery in his usual approach, got the edge which went flying past slip for four, as Ishant conceded 12 in his first over.

The lanky Indian pacer was, however, back with a vengeance in his next over as he sent Jayawardene and Sehwag packing one after the other on consecutive deliveries. Delhi found themselves at 26 for three and staring down a loaded barrel.

Manpreet Juneja and Johan Botha looked to have steadied the batting, putting on 18 runs for the fourth wicket, before the latter tried to cut Anand Rajan over point, but failed. Irfan Pathan walked in at No 6 and put on 21 with Juneja before the latter was scalped by Amit Mishra.

Kedar Jadhav came in at 65 for five in the 14th over as Delhi prepared themselves to get bowled out for a sub-120 total. The attacking batsman, who plays for Mahatashtra in the Ranji Trophy, did not curb his instincts as he launched Ishant for a four and six off successive balls.

Just when you thought Delhi would get past 120, Irfan Pathan (23) perished via his trademark front-foot flick trying to clear deep mid-wicket, but found the fielder. Delhi lost two more in quick succession as Jadhav found himself stranded. However, the wicketkeeper-batsman did not lose hope and clobbered Thisara Perera (two for 31) for a six and a four in the last over to take Delhi to 114.

Delhi’s haplessness was highighted by the stat that Steyn had bowled 17 dot balls in his four overs.

Man of the match: Amit Mishra