Aiming for their first victory of the sixth edition of Indian Premier League, Delhi Daredevils, after being derailed by three consecutive defeats, they face a tricky and disciplined opponent in Sunrisers Hyderabad in their next Indian Premier League clash at New Delhi on Friday.

Hyderabad won by 3 wkts
Man of the Match: Amit Mishra 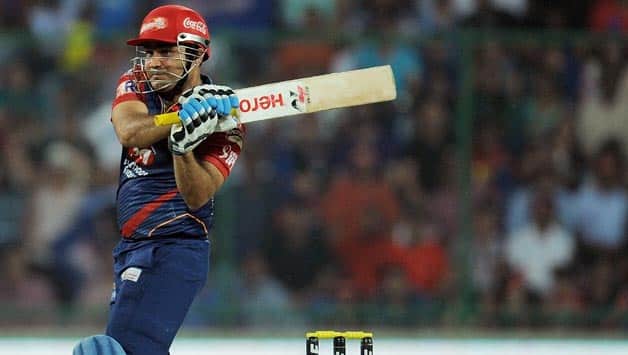 Aiming for their first victory of the sixth edition of Indian Premier League, Delhi Daredevils, after being derailed by three consecutive defeats, they face a tricky and disciplined opponent in Sunrisers Hyderabad in their next Indian Premier League clash at New Delhi on Friday.

A big relief for the beleaguered hosts is that opener Virender Sehwag is likely to play his first match this season, having missed all three clashes so far due to back spasm.

Missing key players such as Kevin Pietersen and Jesse Ryder has already hurt the Delhi team badly and injury to Sehwag had only compounded their problems.

A fit and in-form Sehwag is just what Delhi needs to spring back to life after a dull start as it was the dashing right-hander’s batting prowess which led Delhi to the knockout stage last season.

If Sehwag plays, struggling young batsman Unmukt Chand, who has twice dismissed for a first-ball duck, is likely to make way for the senior pro.

The non-performance of its foreign recruits, except for Australian David Warner, has also added to Delhi’s woes.

Skipper Mahela Jayawardene began well with a fifty in the season-opener but his bat fell silent after that.

Andre Russell and Johan Botha’s combined tally reads a mere 20 runs in the first two matches which led to their axing from the match against Mumbai Indians.

But that did not solve Delhi’s problems as Morne Morkel was hammered around the park by Mumbai’s batsmen and Jeevan Mendis also failed to make an impact. The Sri Lankan neither got a wicket nor did he score runs.

Delhi badly needs its young guns to fire. Naman Ojha, Manprit Juneja and Irfan Pathan will have to contribute more for the side to shake off the disappointment of three consecutive losses.

Delhi face a very disciplined team, which does not have many star players to flaunt but has a bunch of gritty cricketers who have made themselves count, be it young spinner Hanuma Vihari or Sri Lankan all rounder Thisara Perera.

Their batting line-up looks ordinary but Hyderabad have managed to put runs on the board when needed. Cameron White has batted exceptionally well in the previous two games.

If skipper Kumar Sangakkara and Parthiv Patel could do better in the top-order, it will be a big plus for the side.

The visitors would surely fancy their chances against a team, whose batsmen are struggling to find feet in the Twenty20 league.