Rahane also praised the bowlers for their efforts.

His patient half-century helped Rajasthan Royals (RR) notch up a four-wicket win over Sunrisers Hyderabad (SRH) in Indian Premier League (IPL) 2014 and Ajinkya Rahane said that he backed his instinct and was confident that one big partnership will take his team home comfortably.

“When three wickets fall, I wanted to bat as long as possible, I knew we just needed one big partnership,” said Rahane, who was adjudged the Man of the Match for his 53-ball 59 which was studded with six fours.

“Me and Binny enjoy each other’s company very well and it helped us in the middle today. He has improved a lot. I backed my instincts. I decided to take one ball at a time.”

Rahane also praised the bowlers from both the camp for exploiting the conditions well.

“Our bowlers did a good job but credit also goes to Sunrisers bowlers. They bowled very well in the first six overs. It was difficult to bat then. We just wanted to get the momentum going and play to our strength,” he said.

Talking about the runchase, Rajasthan skipper Shane Watson said: “It was a slightly smaller score than we expected. But with the quality they have in their bowling 134 was always going to be challenging to chase down. The wicket played very nicely.”

“Rahane and Binny really held their nerves in the middle to build up a really good partnership,” he said.

Hyderabad skipper Shikhar Dhawan said: “I think 150 would have been good total, we were short by 20-30 runs and it cost us the game.

“It was double paced and swinging initially. We were striking the ball well but unfortunately we could not go through our half century and so we got into the back foot.

“We had the confidence of defending the total. Last year we did defend low scores. Our bowlers did a good job. Our batsmen need to score more runs.” 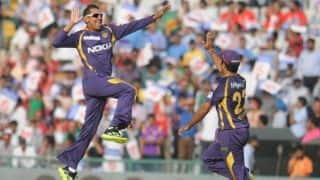 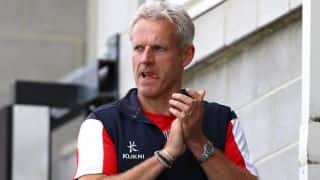