Finch has the ability to explode with his swashbuckling batting.

Thereafter it was a Delhi-Hyderabad tussle where Hyderabad eventually pipped Delhi to the ‘ownership’ of Finch. Finch has the ability to explode with his swashbuckling batting and he has already shown glimpses of it for Australia by notching up crucial hundreds in the shorter versions of the game.

He can also captain the side if needed like he did last season with Pune Warriors India (PWI). 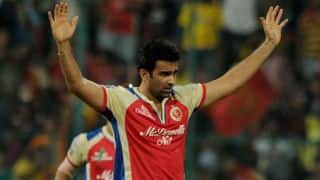