Mendis, averages 13.23 with the ball in Twenty20 Internationals.

Sri Lanka’s mystery spinner Ajantha Mendis is among those who have gone unsold in this year’s Indian Premier League (IPL) 2014 auction.

Perhaps the most staggering non-bid of the auction of this season’s bidding has been the fact that Mendis has gone unsold.

Mendis, who averages 13.23 with the ball in Twenty20 Internationals (T20Is) with an economy rate of 6.15, should have been one of the bigger picks at a base price of 50 lakhs.

Mahela Jayawardene, Kusal Janith Perera, Tillakaratne Dilshan, Angelo Matthews, Mendis, the unsold Sri Lankan list continues. Fancying an Unsold Sri Lankan XI at the end of the day, anyone? It has been the prime story of the day so far for everyone to debate. 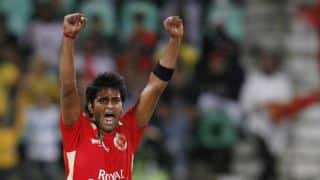