Ben Cutting ended with figures of one for 31 from his four overs.

Australian pacer Ben Cutting says most pitches in India are conducive for bowling the odd bouncers, which can make life difficult for the batsman.

One of his biggest strengths is the ability to get sharp bounce at a good pace. Asked if it gets difficult when bowling in conditions that negate his strengths, Cutting responded in positive.

“It can, sometimes. But in saying that, most wickets in India are actually conducive to the odd bouncer. A little bit more grass on this wicket and we could get the odd one to rise.”

“Sometimes, when you bowl short on these sorts of wickets, it can actually be harder to play than it is on a true wicket, where the batsman can use your pace,” he was quoted as saying in IPL’s official website.

He said he has picked up a few tips from fellow countryman James Faulkner before making his Indian Premier League (IPL) debut in his team Rajasthan Royals’ big win over Delhi Daredevils on Thursday night.

“He’s been here for a while now, has played a few IPL games and done very well. So, it makes sense for me to pick his brains when it comes to bowling on these pitches in the end overs,” Cutting said after an eventful first match that saw him return figures of one for 31 in four overs.

The tall fast bowler, who can get the odd ball to bounce awkwardly, said he was not surprised by stand-in captain Steven Smith‘s decision to send Cutting ahead of himself.

“We had spoken about it before the game and that decision was part of our game plan, which depended on how the wicket was going to play. Smithy is a wonderful batsman and to leave him in the shed says wonders about the boys batting in the top order.”

Batting first helped him form his bowling plans better on Thursday, he said.

“Definitely, yes. We sort of knew how the wicket was going to play from the past two games here; we knew it was going to get worse. Today, we lost the toss, but we still got to bat first on the deteriorating pitch. So, we were very happy with that.”

After starting with a few short and wide deliveries, Cutting found his rhythm and sent down those in-swinging yorkers.

“It was also a case of a bit of nerves. This was the first cricket game I had after four-five months. I am happy that the rusty beginning was followed by a few good things in the game.” 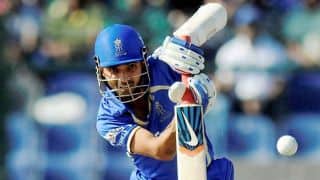 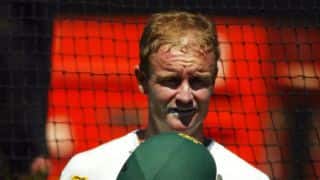