Both Rahul Sharma and Shahbaz Nadeem had 30-odd minutes of "spot bowling".

It is now a known fact that Delhi Daredevils‘ spin department is one of the weakest among the eight teams playing in the seventh edition of the India Premier League (IPL) and that was perhaps the reason why Shahbaz Nadeem and Rahul Sharma had 30-odd minutes of “spot bowling”, in New Delhi on Wednesday.

While coach Gary Kirsten and captain Kevin Pietersen will publicly never admit it but an attack consisting of left-arm spinner Nadeem and leg-spinner Rahul is not only thin on quality but also on experience.

May be that’s the reason that on the first day of Delhi Daredevils’ training session, they were the only two bowlers who faced 30 minutes of “spot bowling” even as the others retired to the cooler confines of the dressing room after a game of football and routine fielding drills.

Both Nadeem and Rahul were taken to a centre net and told to pitch the ball on a spot that was marked by bowling coach Eric Simons. Both got a bit of applaud whenever they the pitched it on the “spot”.

However, it is still not sure whether both will be inducted into the playing XI in the same match.

If one goes by coach Kirsten’s words, then he has the option of seasoned JP Duminy in mind also as the senior Proteas left-hander regularly bowls his off-breaks in T20 Internationals.

Asked if they are a bit short on spin bowlers, Kirsten said, “I don’t think we would want three specialist spinners. Two is enough and Duminy is a frontline spinner these days.”

Even when Pietersen spoke to PTI on Tuesday, he also showed a lot of confidence in Rahul’s abilities.

“We have Rahul, who has played for Pune Warriors and India. He is good,” the captain had said on Tuesday.

The only team that is comparatively weaker is Kings XI Punjab, which only has part-time off-break bowler Glenn Maxwell to look forward to. 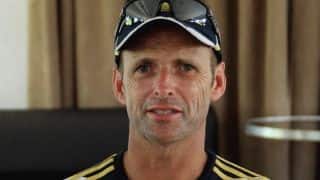