Punjab have been riding high on confidence.

On a roll after notching up nine victories to qualify for the play-off stage, Kings XI Punjab (KXIP) would look to continue their winning momentum when they take on struggling Mumbai Indians (MI) in their first IPL 7 match at home ground on Wednesday.

Punjab have been riding high on confidence after steamrolling almost every other side they have played against and one more victory on Wednesday in front of their home crowd will put themselves in the commanding position as the IPL 7 heads towards the business end.

On Monday, Punjab defeated Delhi Daredevils, once again displaying their class, which has made them a top team this season. Their earlier best performance was the semi-final stage appearance at the inaugural season in 2008.

Unlike in the past, when Punjab looked to heavily bank on performances of a couple of players, the good thing this season has been that the side have struck the right balance.

While Glenn Maxwell, the orange-cap holder with a mammoth 531 runs, has been the side’s star performer, young Punjab players like Sandeep Sharma and Manan Vohra in the batting department and Akshar Patel in the bowling department have also shown great maturity in pressure situations.

The side’s batting department has been strengthened with the presence of Virender Sehwag at the top order in whose company young batters like Vohra have got ample opportunity to display their talent, allowing even skipper George Bailey on occasions to enjoy his team’s batting show from the sidelines.

Accumulating as many wins as possible seemed to be the team’s mantra, as Bailey said every victory was vital as it increased confidence and self belief among the players.

“I think what you get from winning is confidence and self belief. They are really two important things in this format of the game,” Bailey said.

Enjoying a dream run in the tournament, the solid Punjab batting order has successfully chased down 200-plus scores twice so far and has looked the strongest batting side along with Chennai Super Kings.

In the bowling department, the bouncy nature of the PCA Stadium tracks will be to the liking of Punjab medium pacer Sandeep Sharma who has the ability to swing the ball while the team will also hope young Beuran Hendricks, a South African fast bowler, puts up a good show on Wednesday.

On the other hand, it could be a tall order for Mumbai, who barely kept their play-off hopes alive by beating Rajasthan Royals in Ahmedabad on Monday, to get the better of Punjab on Wednesday. They have won just four games out of the 11 they have played so far.

Mumbai will be hoping for a repeat of batting performances from Lendl Simmons (62) and Michael Hussey (56), which they displayed against Rajasthan Royals on Monday.

The PCA tracks, which always has something for batsmen and bowlers alike, should be to the liking of the likes of Kieron Pollard.

The visitors would also be hoping that their senior bowler and off-spinner Harbhajan Singh will use his experience at Mohali to his side’s advantage.

Mumbai also have a star pace ace in Sri Lankan Lasith Malinga, a top wicket taker in the competition. 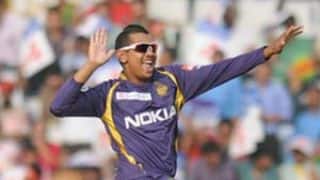