Kolkata Knight Riders have kept Kings XI Punjab in check in the IPL 2014 final at Bangalore. In 10 overs, Punjab are only 58 for two. Wriddhiman Saha and Manan Vohra are batting in the centre. George Bailey and Virender Sehwag are the batsmen dismissed.

Shakib Al Hasan came on to bowl the ninth over and he conceded only four runs. In nine overs, Punjab had scored 54 for one, which was decent, but one would have said that Kolkata had done a way better job.

Piyush Chawla then came on to bowl the 10th over. After a couple of singles, they went for a quick one off the third ball. There was a run-out shout but Vohra had returned to the crease.

Earlier, Kolkata won the toss and chose to bowl first on what looks like a very good batting track at Bangalore. Kolkata played an unchanged side for this contest. Punjab made one change as Lakshmipathy Balaji came in place of Sandeep Sharma. 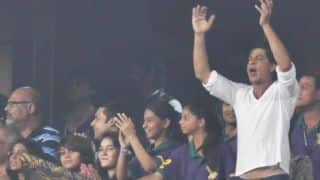