Punjab will aim to win and seal IPL 7 playoffs berth.

In Indian Premier League (IPL) 2014, Delhi Daredevils will take on Kings XI Punjab at Delhi in game No 45 in the star-studded tournament. Punjab have been in high form n IPL 7 and they now have won eight games from 10 matches with 16 points to their name. The likes of Glenn Maxwell, David Miller, George Bailey, and Sandeep Sharma have done well for them in IP 7. However, that hasn’t been the case with Delhi Daredevils though, as they have struggled badly to make their mark in IPL 7. Catch the live blog of the match here.

Catch live streaming of the Rajasthan Royals (RR) vs Mumbai Indians (MI) on GoCricket and StarSports.com.

Their head coach Gary Kirsten and bowling consultant Eric Simmons have also failed to provide any answers to the team’s lacklustre showing. The think-tank though would be looking to forget the past and focus on their final three games of the tournament. With their backs to the wall, last-placed Delhi have nothing to lose, a position which sometimes works for a team lagging behind. Domestic players have also made their presence felt for the Punjab unit with medium-pacer Sandeep Sharma, left-arm spinner Akshar Patel and all-rounder Rishi Dhawan turning in as impact players. The Patiala-born Sandeep, bagging 14 wickets in eight matches, is not only in the top-10 bowlers list but has also been noticed by cricket pundits and former players, who predict a bright future for him. The Preity Zinta co-owned unit holds an edge over Delhi in the head-to-head count with a 7-5 advantage.

A distraught Delhi though will be hoping to give their fans a happy ending as they try to conquer ‘Mount Punjab’. 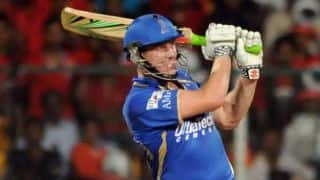