Catch the live streaming of the Hyderabad vs Bangalore match here.

In Indian Premier League (IPL) 2014, Sunrisers Hyderabad will take on Royal Challengers Bangalore at Delhi in game No 46 in the star-studded tournament. Bangalore have been in high form in recent times IPL 7 and they must be high on spirit after defeating Chennai Super Kings (CSK) at Ranchi in their last match. The likes of Chris Gayle, Yuvraj Sing and AB de Villiers  have done well for them in IP 7. However, that hasn’t been the case with Sunrisers though, as they have struggled badly to make their mark in IPL 7. Catch the live blog of the match here.

Sunrisers are virtually out of the race following their seven-wicket loss to Kolkata Knight Riders (KKR) on Sunday, but would like to achieve a win over RCB and salvage some pride. Sunrsers Hyderabad have been inconsistent this season and are having a poor run on their home ground, losing all the three matches in a row so far. The Hyderabad team scored a massive 204 against table-toppers Kings XI Punjab ( on May 14, but settled for a less challenging 142 runs against Kolkata on Sunday. The team lost wickets at regular intervals as the Kolkata bowlers got the better of them and a determined effort by their bowlers was not enough.

In batting, Shikhar Dhawan, Aaron Finch, Naman Ojha and KL Rahul need to come up with a sterling show tomorrow to make it tough for the rivals. Much is also expected from Dale Steyn, Bhuveneshwar Kumar, Amit Mishra and Darren Sammy. 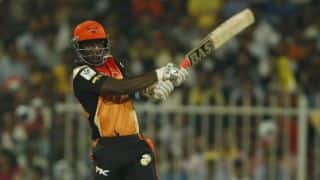