IPL 2014: Jalaj Saxena to be replaced by Lendl Simmons in Mumbai Indians squad

IPL 2014: Jalaj Saxena to be replaced by Lendl Simmons in Mumbai Indians squad

Lendl Simmons will be able to play with immediate effect.

Jalaj Saxena has been replaced by Lendl Simmons in the ongoing Indian Premier League (IPL) 2014. Simmons can play with immediate effect and will be part of the Mumbai squad. He hasn’t played a single IPL match and will be looking to perform for the side. Mumbai being the reigning champions haven’t won even one game and are not the side they looked in the last edition.

The media release from the official IPL website reported, “The IPL Event Technical Committee has approved Lendl Simmons as a replacement player for Jalaj Saxena for the remainder of the IPL 2014 season.”

Rohit Sharma is captaining the Mumbai side and will be hoping he can use the services of Simmons to his benefit as Mumbai need some kind of encouragement. Corey Anderson has not been able to reproduce the same performances he did with New Zealand. Ricky Ponting has been roped in by Mumbai as an advisor after their third straight loss in the tournament.

No team has won the IPL after losing the opening four matches and this is something that Mumbai would want to ignore. Simmons has been a regular with the West Indies Twenty20 team and will be hoping  he can contribute with the bat, a place where Mumbai hasn’t performed well this year.

Mumbai plays their last game in the United Arab Emirates (UAE) leg of the IPL against Sunrisers Hyderabad in Dubai on April 30 and will be hoping they can end their campaign on a high with a victory. 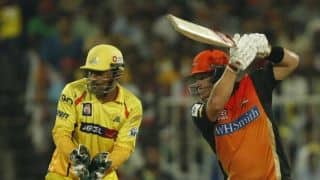