Duminy was all praise for AB de Villiers.

He himself knows a thing or two about batting in the end overs and Delhi Daredevils’ J P Duminy says he has taken tips from his South teammate AB de Villiers, who is considered one of the best finishers in the game today.

Delhi Daredevils found themselves in tatters before Duminy’s brilliant unbeaten half century took them to a decent 145 for four in their Indian Premier League (IPL) campaign opener against Royal Challengers Bangalore here yesterday. However, his knock went in vain as Yuvraj Singh inspired RCB to a comfortable eight-wicket win with a 29-ball 52.

Later, talking about finishers, Duminy was all praise for his national teammate.

“I have taken a tip or two from AB de Villiers. He is an outstanding player and has done the job many times for South Africa and for the Royal Challengers Bangalore. So you can only learn from someone like that,” Duminy said.

“And it is always great to be a part of the team he is playing in. Unfortunately, we got to play against him this year, but it is always exciting,” he added.

His innings might not have helped Delhi post a win but Duminy was happy to have scored runs first up.

“It is always good to get some runs. It is a new franchise and you want to perform for them. Unfortunately, we could not get a win, but we put up a good fight,” Duminy told IPL’s official website after the win.

Having walked out to bat with Delhi tottering at 17 for three in five overs, Duminy stitched an unbeaten 110-run partnership for the fifth wicket with Ross Taylor.

“We had lost a lot of wickets up front and our aim out there was to build a partnership and not give away our wickets easily. We did just that and set a competitive total of 145.

But unfortunately, there were a couple of errors on the field and other things, which did not go our way.”

Duminy said that his partnership with Taylor was an enjoyable one.

“Ross and I have played international cricket for a number of years now and we both shared experiences and ideas in the middle. It was the first time that I was batting with him and it was really exciting and enjoyable.

“It was good to hear his ideas and the way he goes about his business, and obviously, we can always learn from each other.”

Asked if it was tough to bat under such testing conditions when the chips are down, Duminy said, “I have played quite a few such innings in the past. I backed my natural instincts while playing today, and as a player, you got to read the situations. It was nothing new, to be honest, and I knew we needed to set up the game for the back end, and it worked nicely for us.”

And asked if he has been given the role of a finisher in the side, he said, “Not really. But today, I had to come in and consolidate a bit, try to work the ones and try to pick up the odd boundary and finish it at the end. I am pleased that I got an opportunity to put in a performance for the team, and I only hope it continues.” 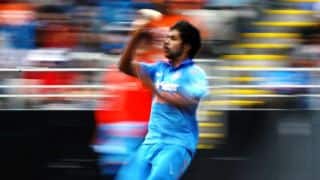 Varun Aaron says he won't cut down on pace