George Bailey agreed and said Delhi could have put up a bigger score.

“Incredibly tough to get over that one. Our strength has been our batting in the last five-six overs, but it just wasn’t meant to be. Hopefully, we can finish well in the remaining matches. Today [Monday] was a team effort,” he said after the match.

Punjab captain George Bailey agreed and said that Delhi could have put up a bigger score.

“I thought they got a better start than they should have, they were probably under par but only just,” he said.

Explaining his decision to demote himself to number seven in the batting order, Bailey said, “I wanted to keep the left-right combination going, especially as there was a short boundary on one side.”

Man of the Match Akshar Patel, who scored a crucial 42 not out to take Punjab home and also returned with impressive bowling figures of one for 18 off his four overs, said he was happy that he could perform in pressure situations.

“If you want to play cricket for a long time, you have to perform in the pressure situations. I have told the captain that I don’t mind bowling at any stage of the innings, I want to prove myself here,” Patel said. 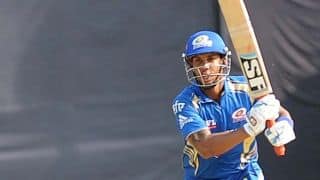