Delhi are at the lower half of the IPL table but Parnell said that the team morale was still high.

Delhi Daredevils‘ (DD) pacer Wayne Parnell is all praise for his skipper Kevin Pietersen, saying that the Englishman’s calmness has rubbed off on his team-mates in their Indian Premier League (IPL) campaign so far.

“Pietersen brings his own energy to the team and his calmness rubs off on the other players. If you have a calm captain, you have a calm team as well,” Parnell said after his side’s six-wicket win over Mumbai Indians.

“Having confidence helps you and having the backing of the support staff and the captain is massive for any cricketer. Everyone wants to be backed by the leaders, and I feel I have that backing,” he said.

Parnell (1/17) played a big role in Delhi restricting Mumbai to a modest 125 for six in their IPL match yesterday, a total which they overhauled in 18.5 overs. The left-arm pacer, however, insisted that it’s all about teamwork.

“I was actually speaking to one of the owners the other day. He mentioned to me that the Delhi Daredevils play for the badge and not for themselves. As a collective bowling unit, we share information. The constant sharing of information between us helps us perform well as a unit,” he said.

With three losses and two wins, Delhi are at the lower half of the IPL table but Parnell said that the team morale was still high after the win over Mumbai.

“It is nice to get some momentum going in to India. I feel we have been playing really good cricket over the past few games. Most of our losses in the tournament have been close, barring the game against Chennai Super Kings where we were outplayed,” he was quoted as saying by IPL official website.

Parnell, 24, has been in and out of the Proteas side since his debut in January 2009, but the lanky bowler insists that he has matured with time.

“Over the last 12 to 16 months, after being out of the national team, I went back to domestic cricket and put up some decent performances to get back into the South African side. I have also learnt to wait for my chances and do well for the team when I do get a chance.

“You have the likes of Morne Morkel and Dale Steyn in the pace attack for South Africa, and for me as a young guy, I have to hang in there and perform well when I am required,” Parnell said.

Twenty20 cricket is all about innovation and Parnell also believes that adapting to the situation was the need of the shorter format.

“I was speaking to Gary Kirsten earlier regarding the pace I have to bowl. Normally, I bowl close to 130-140 kph, but today on this surface, it was crucial to take the pace off the ball rather than getting more pace on the ball,” he said. 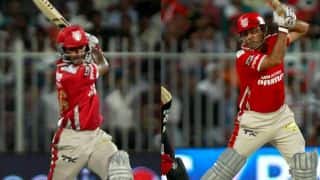