Both Delhi and Rajasthan will draw confidence from their last wins in the first leg of IPL.

Karun Nair awarded man of the match for his match winning knock.

RR 156/3 Ovs 18.3
Karun 73(50) Watson 16(10)
Another slower delivery from Unadkat and another exquisite scoop from Karun for a boundary and its one needed. Karun also finishes things off by lifting the ball over the field for another boundary to lift Rajasthan to a comfortable win!
RR 148/3 Ovs 18
Karun 65(47) Watson 16(10)
Parnell is brought in and Karun times the ball down to the third man boundary and Rajasthan are cruising in style. Walled Wayne almost smacks the ball on Watson. Then Jadhav shows how good he is on the field with a stunning direct hit from cover point which Watson narrowly escapes by a lick of paint. The last ball is clubbed in typical Watson style for a six and Rajasthan need just six to win.

All Indian players should be made to train with Rajasthan Royals. No one utilises them better than RR. Isn’t it awesome? #IPL7

DD 89/3 Ovs 14
D Karthik 10(13), Duminy 7(12)
Runs have dried up after Tambe’s double strike. Even the unfancied Dhawal Kulkarni is looking good and the batmsen need boundaries. Just four runs comes of yet another good over for Rajasthan.
DD 85/3 Ovs 13
D Karthik 8(11), Duminy 6(8)
Rajat Bhatia is back into the attack after being taken apart by de Kock earlier. Karthik hammers the third ball of the over down the ground for a couple but Bhatia outfoxes DK with a slower one and the Tamil Nadu batsmen keeps the strike
DD 80/3 Ovs 12
The bearded fury Kane Richardson is back and starts with two superb deliveries that the batsmen test the close fielders for two singles. Duminy strokes the ball down to fine leg for a single of the fifth ball. Excellent over and only three comes of it.
DD 77/3 Ovs 11
D Karthik 2(3), Duminy 3(5)
The double breakthrough has begged Delhi back. Faulkner is back into the attack. Faulkner is tidy and the batsmen can only run singles and leg byes of the first few deliveries. Six runs comes of the over.
DD 71/3 Ovs 10
D Karthik 1(1)
Tambe Strikes for Rajasthan. After settling in well KP misconnects a drive and the ball lands straight to Steven Smith at long on.KP is kicking himself after playing a poor shot and getting an early life. Tambe gets the big fish. The Mumbai spinner dives expertly to latch on to a catch of his own bowling and its a double strike.
OUT!Pietersen cSmithbTambe 14(13), OUT!De Kock c&b Tambe 42(33)
DD 68/1 Ovs 9
De Kock 41(30), Pietersen 14(13)
Bhatia continues with his slow medium pacers and the first two balls yield singles. De Kock yet again improvises brilliantly to beat fine leg for a boundary. The young South African is on for something special. The fifth ball his slapped to deep cover for a single. KP shows his class again after the ball is slightly overpitched by Bhatia. Its a boundary.
DD 57/1 Ovs 8
De Kock 35(26), Pietersen 9(11)
After a bad first over, Tambe comes back into the attack. De Kock digs the ball through the off-side for a single. Pietersen expertly strokes the ball through the off side for a boundary and keeps the strike.

This is really poor umpiring here. KP was clearly run out but the umps chose not to go to the 3rd umpire

DD 50/1 Ovs 7
De Kock 33(24), Pietersen 4(7)
Local boy Rajat Bhatia is into the attack. Madness! The ball hits KP’s pads and Sanju Samson hits the stumps and KP is short of the ground. But the umpire inexplicably doesn;t go upstairs and KP stays. The umpires are going to pay for this! Back to the action and De Kock taps the ball for a single. Bhatia’s slower one continues to restrict batsmen and only four comes of the over. The Rajasthan camp still can’t get over the decision.
DD 46/1 Ovs 6
De Kock 33(21), Pietersen 2(3)
The old warhorse Pravin Tambe is into the into the attack and KP takes a single. De Kock yet again shows his class by smacking the ball through the off-side boundary after provided with a hint of width. Silky work from de Kock pierces the fielders and it is another boundary. The last ball is hit on the leg side for a couple and its a couple more for de Kock.
DD 35/1 Ovs 5
De Kock 21(17), Pietersen 1(3)
Faulkner is brought into the attack and a lofted shot by Vijay doesn’t get the distance and it is a simple catch for skipper Watson at mid-off. Delhi captain Kevin Pietersen arrives at the crease. De Kock strokes the ball to the leg side for a single of the fourth ball. Kevin plays a defence of the first ball. KP strikes the ball down the ground and keeps the strike.
M Vijay cWatsonbFaulkner 13(11)
DD 33/0 Ovs 4
De Kock 20(14) M Vijay 13(10)
Watson brings himself into the attack and Vijay gracefully strokes the ball on the leg side and Binny does an excellent job cutting off a certain boundary. The batsmen run three. Watson is aiming for the pads and losing his control a little bit. De Kock takes a single. A good slow ball of the fourth delivery sees Vijay gently tapping the ball on the leg side for another single. The first six of the match! De kock moves to the leg side and paddles the ball down fine leg for a six.
DD 22/0 Ovs 3
De Kock 13(10) M Vijay 9(8)
Dhawal Kulkkarni is into the attack and De Kock hits the ball to deep mid wicket for a single. A good length deliveries congests Vijay and its only a forward defence. Another good ball in the same area produces another dot ball. The fourth delivery is slightly short and Vijay taps the ball on the leg side for a single. A good slower ball deceives De Kock for another dot. Kulkarni wastes his good work by a ball ball on the pads which is tucked away for a boundary.
DD 16/0 Ovs 2
De Kock 8(7) M Vijay 8(5)
The impressive Kane Richardson comes into the attack and Vijay’s favourite cover drive is in full flow and the ball reaches the boundary. Vijay runs a single of the next ball. De Kock, cautiously taps the ball to short third man for another single and Richardson finishes the over with an excellent bouncer which the batsman fends away.
DD 9/0 Ovs 1
De Kock 6(4) M Vijay 3(2)
After some success in the previous game Watson persists with Stuart Binny with the first over. De Kock looks good with a good straight drive that is traight to the fielder and his favourite cutshot that goes for a boundary. De Kock runs a single of the third delivery to give Vijay the strike. Vijay trickles the ball fine towards third man and the batsmen run two.Single for Vijay with a flick to fine leg and De Kock keeps strike.

Toss: Rajasthan have won the toss and have chosen to bowl first. Rajasthan have made one change as Dhawal Kulkarni comes in place of Iqbal Abdulla. Laxmi Ratan Shukla has been replaced by Rahul Sharma in the Delhi Daredevils side.

Hello and welcome to CricketCountry’s live blog of the Indian Premier League (IPL) 2014 match No 25 between the Delhi Daredevils (DD) and Rajasthan Royals (RR) at the Ferozeshah Kotla Stadium in New Delhi. This is R Vishal, and I will be bringing you the over-by-over updates of the game. Read the preview of the match here.

Both Delhi and Rajasthan will draw confidence from their last wins in the United Arab Emirates (UAE) leg of the IPL 2014. While Delhi trumped a hapless Mumbai Indians’ side by six wickets, Rajasthan beat Kolkata Knight Riders in a thrilling encounter that went into the Super Over, eventually won by the Royals on the virtue of hitting more fours in the match.

For Delhi, JP Duminy and Murali Vijay have been among the runs, while wicketkeeper Dinesh Karthik too has a half-century to show. But a lot will be expected from the rest of the batsmen such as opener Quinton de Kock, Ross Taylor and captain Kevin Pietersen. For the bowlers, pacer Jaydev Unadkat and spinner Shahbaz Nadeem have taken six and four wickets respectively so far, but the Daredevils will need other bowlers to fire as well.

Rajasthan, on the other hand, are on a roll with back-to-back victories and they would look to keep their momentum going on May 3. Shane Watson‘s side have been a cohesive unit and they have always contributed as a team. Ajinkya Rahane has been rock solid at the top, but he needs a good opening partner to give Rajasthan a good start. 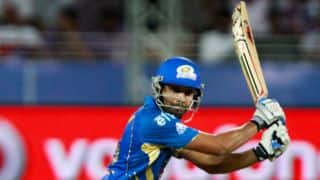