Catch the full report of the match here

Royal Challengers Bangalore captain, Virat Kohli has won the toss and elected to field. The captain of Kolkata Knight Riders is Gautam Gambhir.

Hello and welcome to CricketCountry’s coverage of the Indian Premier League (IPL) 2014 game between Kolkata Knight Riders (KKR) and the Royal Challengers Bangalore (RCB). I am R Vishal and will take you through the game. This match is being held at the Eden Gardens, Kolkata. Kolkata will be looking to seal their spot in the playoffs with a win over Bangalore, who have been inconsistent with their performances. After a slow start Kolkata have found form and have won their last five matches. The last match these teams played went down to the last over and Kolkata won the game. Bangalore are facing an exit and a defeat would make it certain. Their qualification hopes hang by a thread and their chances are very bleak, unless there is a miracle and other results also fall in place. 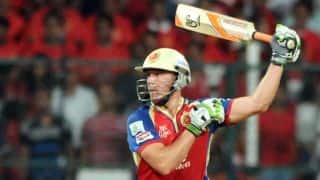