Follow Live Blog of the IPL 2014 match between Kolkata and Hyderabad.

No prizes for guessing who the Man of the Match would be. YUSUF PATHAN.

What a knock by Yusuf Pathan. What a match! This is the match report from Eden Gardens.

Toss: Kolkata Knight Riders have won the toss and elected to bowl first. They have made no changes to their playing XI from the last match.

Sunrisers Hyderabad have made a couple of changes — David Warner plays in place of Aaron Finch, and Aniruddha Shrikkanth replaces Irfan Pathan.

Hello and welcome to the Indian Premier League (IPL) 2014 match between the Kolkata Knight Riders (KKR) and Sunrisers Hyderabad (SRH). We will take you through the contest that is taking place at the Eden Gardens, Kolkata. The home side have already qualified for the IPL 7 playoffs and the visitors are out of the competition and have nothing to lose in this contest. A win for KKR will be a morale booster, ahead of playoffs, whereas, for SRH, a win will help them finish the tournament with pride. The last time the two teams met, Kolkata won.

Hyderabad have seen a change in captaincy mid-way through the season. After starting with Shikhar Dhawan as their captain, VVS Laxman announced few matches earlier that Darren Sammy will take over as the captain of the side. Their star bowler Dale Steyn hasn’t been in good form. Whereas, Kolkata have been boosted by the performances of Robin Uthappa, Shakib Al Hasan and Sunil Narine. KKR have a well balanced side and are favourites in the clash. 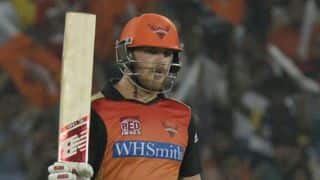