Catch the live blog of the KXIP-RR match here.

Did laxman jus say bitch instead of bish..? Huh.. Pitch and bish 2 words in mind made that deadly word bitch.. #ipl

Ramiz Raja- ‘Kings XI Punjab have done well defending scores over 175. 5 out of 4 they have won’ Interesting fact, wish it made sense! #IPL

Question is not whether Nawaz Sharif is coming to India or not, the real question is when Rameez Raja & Waqar Younis are leaving India. #IPL

That, my friends, is the first strategic timeout.
RR 54/1 (7)
Rahane 22(24), Sanju 19(12)
One. Plays to third-man. One. Plays with soft hands, quick single. One. Beuren comes round the wicket, Rahane pulls to deep mid-wicket. Dot. Leaves that alone. SIX! Bounces, hooks hard, top-edges, still soars over deep fine-leg! One. Plays to extra-cover.
RR 44/1 (6)
Rahane 20(22), Sanju 11(8)
FOUR! Steps out and dispatched through the vacant mid-off! Dot. Plays to mid-wicket. Leg-bye. Shuffles across, Rishi appeals, not out. FOUR! Seven fielders inside the circle, guided through the vacant third-man! Dot. Pushes to point and tries a run, sent back by Ajinkya. FOUR! Easy placement through mid-wicket, that’s three boundaries in that over!
RR 31/1 (5)
Rahane 16(19), Sanju 3(5)
One. Plays past cover-point. One. Plays to extra-cover. Dot. Plays to cover-point. Dot. Plays to cover-point. One. Pushes to long-on. Dot. Plays back to Akshar.
RR 28/1 (4)
Rahane 14(15), Sanju 2(3)
Dot. Sanju keeps it out, nice in-dipper. One. Plays to third man. Dot. Doesn’t time, ball goes to point. Dot. Down the legs, not called a wide. One. Balaji dives at fine-leg, just a single. One. Guides to third-man. One. Plays with soft hands and runs.

Dear Pakistan, we’ll allow your players in the #IPL if you promise to take Rameez Raja back.

“You’ve got to lure him into the big shot. He loves hitting in the air.” Then why do you need to lure him?? #rubbishcommentary #IPL

That is the second strategic timeout. Lots of strategies being processed out there.
KXIP 126/4 (16)
Miller 7(8), Bailey 4(5)
One. Drives to long-on. Two. Cuts, but there’s a sweeper. Dot. Plays to cover. One. Tries an inside-out stroke, not the best of shots. One. Plays to long-on. One. Flicks to fine-leg.
KXIP 120/4 (15)
Miller 5(6), Bailey 0(1)
Dot. Plays to cover. One. Pushes to long-off. Dot. Edges. OUT! Saha tries to clear long-on, but cannot go over Ajinkya! One. Pushes to long-on. Dot. Misreads the googly.
OUT! Saha c Ajinkya b Tewatia 27(20)!
KXIP 118/3 (14)
Wriddhi 27(18), Miller 3(3)
One. Plays to cover. One. Top-edges, the ball lands between Faulkner and Watto. One. Plays to off. One. Plays to fine-leg. One. Guides to third-man.
REMINDER: If the match does not resume today, RR will be through.
That will be the end of the road for MI, SRH, and RCB.
It’s raining out there. The covers are out, and it doesn’t look like the match will start anytime soon.
KXIP 113/3 (13.1)
Wriddhi 25(16)
Unusual slog from Marsh, Ajinkya runs to his right and takes a nice catch at long-on.
OUT! Marsh c Ajinkya b Malik 40(35)!
KXIP 113/2 (13)
Marsh 40(34), Wriddhi 25(16)
One. Plays to point. One. Plays to cover, fifty-partnership. Dot. Good one from Faulkner, Wriddhi is completely beaten. Dot. Excellent bouncer from Faulkner, Wriddhi tries to hook and misses. FOUR! Excellent shot through cover-point, not much wrong with that one, amazing adjustment. FOUR! Tries to bounce, Wriddhi hooks, ball runs towards fine-leg.
KXIP 103/2 (12)
Marsh 39(33), Wriddhi 16(11)
One. Plays to third-man. Dot. Plays and misses outside off, lazy effort. FOUR! Driven beautifully through extra-cover, what a shot! Two. Flicked behind square, easy pickings. One. Plays to third-man. One. Slower one, inside-edges.

Change spelling of ‘Punjab’ to ‘Panjab’ just so that the foreign commentators could pronounce it right. #IPL #KXIPvRR

Manan Vohra is as close as anyone will come to being a right handed Yuvraj Singh. #KXIPvsRR #IPL

Going by sheer quality of his strokemaking, it won’t be surprising if @ImMananVohra is picked for the ODIs in Bangladesh next month #IPL

News is that KXIP has decided to leave Maxwell out instead of Miller.

Watson wins the toss and elects to bowl.

Hello and welcome to the live updates of the 52nd match of IPL 2014 between Kings XI Punjab and Rajasthan Royals at Mohali. I will be bringing all the action to you from this crucial encounter.

It has been Punjab’s season so far, with them losing only three matches so far. On the other hand, after losing five matches, Rajasthan has slipped one place down in the IPL Points Table, to fourth position. With Punjab suffering a loss at the hands of Mumbai Indians (MI) in Mohali on Wednesday, Cheteshwar Pujara admitted that fortunes fluctuate in the T20 format.

The Royals, champions of the inaugural edition, have been performing as per the expectations with some little-known players contributing massively to their success. However, they are coming into this match after a 25-run loss against Mumbai Indians, paying the price for resting key players such as Steven Smith and Ajinkya Rahane. Barring opener Karun Nair‘s 48 and Brad Hodge‘s 40 and James Faulkner‘s 31 down the order, none of their other top-half batsmen contributed significantly as Mumbai won by 25 runs after setting a target of 179 for the Royals. 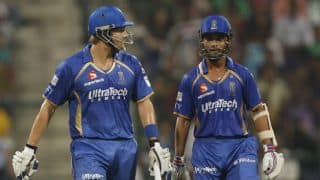