Catch the live blog of the Sunrisers vs Royal Challengers match here.

Hello and welcome to CricketCountry’s live blog of Match 46 of the Indian Premier League (IPL) between Sunrisers Hyderabad (SRH) and Royal Challengers Bangalore (RCB). I am Nishad Pai Vaidya and I will be bringing live updates of the match. Royal Challengers Bangalore (RCB)would look to brighten their prospects of earning a playoffs berth with a win over Sunrisers Hyderabad (SRH). Catch live score and ball-by-ball commentary of the match here

Hyderabad are out of playoffs contention, after losing against Kolkata Knight Riders in their last match. With two matches left, Hyderabad are at seventh position in the IPL 2014 points table with eight points. Sunrsers Hyderabad have been inconsistent this season and are having a poor run on their home ground, losing all the three matches in a row so far.

Bangalore has been erratic side, but with Yuvraj Singh and Chris Gayle performing well in the last game and with AB de Villiers’s 14-ball 28 cameo, RCB look better than SRH. Adding to that, the side has had some decent outings in recent times, beating dominant Chennai Super Kings in their last match at Ranchi. 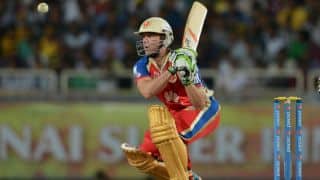