Rajastna were led by Rajat Bhatia as they restricted Hyderabad to a modest score.

The Rajasthan Royals put in a disciplined bowling performance as they restricted Sunrisers Hyderabad to 133 for six in the Indian Premier League (IPL), 2014.  In the middle overs, Rajasthan were led by Rajat Bhatia, whose remarkable spell of two for 22 didn’t allow Hyderabad a chance to build a start and that was crucial in the end.

The match was played in the backdrop of Kings XI Punjab’s fantastic run-chase against the Chennai Super Kings. However, with the lights coming on, batting wasn’t all too easy. Thus, Rajasthan put Hyderabad in to bat on a surface that had a greenish tinge to it.

The Rajasthan bowlers were on the money and did well to keep the potentially explosive Hyderabad batting under check. In the first over, Dhawal Kulkarni snapped Aaron Finch as he offered a catch straight to point.

Shikhar Dhawan and David Warner were trying to get going but it wasn’t that easy. They did find the occasional boundary, but the Hyderabad run-rate was hovering around six. Pravin Tambe bowled with good control in the middle and conceded only 23 runs in his four overs. But the real star was Bhatia.

Bhatia, a domestic stalwart, has made a name for himself in the IPL with consistent performances with the ball. Taking the pace off the ball, he dented Hyderabad in the middle as he had Dhawan caught for 38 and then Warner holed out to the deep in the 14th over. Warner’s knock was quite uncharacteristic as he scored only 32 in 35 balls. Bhatia finished with two for 22 in his four.

Hyderabad kept losing wickets and some Venugopal Rao did help them push past 120. But, one gets the sense that it isn’t enough on this surface. The wicket did seem slow and shot making wasn’t easy. Rajasthan may not find it very easy to chase this total. 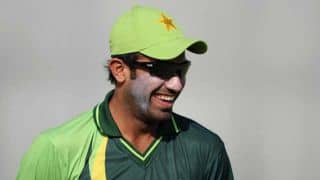