Ravindra Jadeja, whose all-round display helped Chennai Super Kings beat Rajasthan Royals by seven runs in an Indian Premier League (IPL) match on Wednesday, said that he was enjoying his bowling more than batting as he was able to extract turn from the slow pitch at Dubai.

“I was enjoying my bowling. Wicket was pretty slow and the ball was turning, so I was bowling on the right areas and we knew 140 was a defendable total,” Jadeja, who hit a crucial 36 not out and then grabbed four wickets for 33 runs, said after the match.

“Bowling was more enjoyable than batting. When I went out to bat the situation was tight. So I had to play till the last ball and luckily I did,” he added.

“The last few overs were quite pleasing. Apart from that it was a very good game. The wicket got a little slower in the second innings which made it hard for them. Overall the batsman have put on a good score and the bowlers have backed it up,” he said.

“Ishwar Pandey bowled the perfect length on this wicket and was well supported. When Dwayne Smith was batting he was batting on a different wicket. You must have seen the batsmen hitting the top half of the bat rather than the middle. The bounce made it tough.

“It’s looking good, but at the same time (Dwayne) Bravo has been a terrific all-rounder for us. With Bravo around it gives us a further option to strengthen the side.”

A disappointed Rajasthan captain Shane Watson rued the lack of partnership and also took the blame to himself for getting out to a bad shot.

“Very disappointing. One decent partnership was needed and we weren’t able to get that. It was a very good bowling effort against their high quality batting as well. It doesn’t often happen that someone goes crazy like Smith did, especially after an early wicket. We’re trying to execute wide yorkers, but getting a few wides there is okay.

“It’s a learning curve for us, we have to be better next time to chase down something like that. Myself as captain and at No.4, I shouldn’t have got out like that,” he said.

Asked if he would consider opening the batting, Watson said, “It’s something we were talking about and what might fit the team’s needs best.” 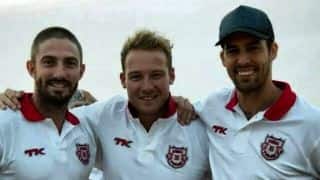 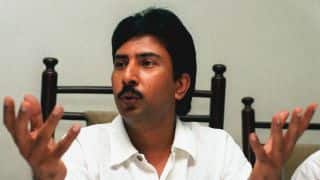