“We did not feel we were out of the game and certainly the first six overs showed how good the pitch was. Tough chasing that amount of runs over a period of time you are going to get setbacks but there’s no doubt those two runs outs were instrumental in our losing our momentum,” said Fleming after his side ended at 202 for seven chasing KXIP’s ground record score of 226 for six.

“We lost Suresh and the run out of Brendon were two key moments of the game, that’s why we stuttered during middle and later parts of the chase. They also bowled well, bang on target. It was tough for bowlers as 420-odd runs were scored. Their execution was better than us,” said the former Kiwi skipper after his side failed to make it six out of seven finals in IPL history.

Raina belted 6 sixes and 12 fours in a knock of 87 in 25 balls before he was run out brilliantly by rival captain George Bailey off the first ball post powerplay, which yielded 100 runs.

New Zealand captain McCullum, who is known for big hitting, was run out six overs later for 11 and from then on the Super Kings were left to play catch-up though captain Mahendra Singh Dhoni tried his best making an unbeaten 42 in 31 balls that narrowed the margin of defeat.

“We lost wickets at regular intervals once we lost Suresh [Raina]. It’s very hard, the pressure of chasing a big target and you really need a big partnership of substance and a very big score. 85 [in fact 87] was a wonderful score, but we probably needed 140 out of Suresh and the other guys to bat around them. He could have won the match for us quite easily if he been around for 3-4 more overs,” he added.

Fleming praised Virender Sehwag‘s stupendous knock of 122, which came off just 58 balls and contained 8 sixes and 12 fours, and said his players had talked about his amazing ability in the run-up to the make or break game.

“Unfortunately it was very good. He gave me lot of headaches when I was captain of New Zealand and I thought those days were gone. That was vintage Sehwag today, wasn’t it? He was wonderful.

“The boys have been talking about him, were wary about him. On a good pitch he is still a very dangerous player.

Today he rolled back the clock, ran hard between the wickets, hit the ball cleanly.

“I was very impressed with the innings he put together and the length of the innings as well. He was instrumental in giving them that big score.”

Fleming was candid to say this season Kings XI batsmen had the wood on his team’s bowling attack and in fact relished it.

“Looking at the games played against KXIP, they have taken a liking to our bowling. They have been very aggressive this year and done well against us, [Glenn] Maxwell twice and Sehwag once. It can happen in a tournament like this.

“In some ways we expected a high-scoring game especially at this ground which has seen some big scores. In the last game played here 190 was scored in 14 overs.”

Fleming explained the promotion of Jadeja ahead of Dhoni and said the team wanted to have a left-right combination to tackle the rival spinners at that stage.

“They had a leg spinner [Karanveer Singh] and a left-arm spinner [Akshar Patel]. For the left hander it’s a distinct advantage when you are playing aggressively. Jadeja’s role was to upset the leg spinner which he did and continue the momentum of the game so that they have to change their tactic and we could maintain a left-right combination [at the crease].

“It’s not an uncommon tactic to use. If you had watched the IPL most teams do it. Because it’s easier to have a spin bowler having to adjust to a left and right hander and left hander has more success against a leg spinner and a left arm spinner.”

Fleming said the IPL has seen big innings and scores when the batsmen have played with freedom in achieving specific targets.

“It?s amazing isn’t it when the guys put their minds to it, just play with that freedom. We saw some great play in the games where teams needed to get the runs in certain amount of overs and that seems to free up the players.

“Conditions are good [for batsmen], which they have been, especially here where it is very good. Targets and scores continue to be broken. Not easy on bowlers but it’s wonderful to see, isn’t it?

“Suresh Raina’s innings today was unbelievable batting, not slogging. It was just clean hitting, as Sehwag’s too. They showed amazing skills of the game.”

Asked about the controversy raging in his country with former teammate Chris Cairns accused by a few players of being involved in fixing games, Fleming denied New Zealand cricket was in trouble.

Incidentally, Fleming is one of the players who have given testimonies to the International Cricket Council on the contentious issue.

Lou Vincent, another former New Zealand player who has confessed to fixing games, has pointed an accusing finger at former all rounder Cairns , along with current skipper McCullum in statements to the anti-corruption wing of ICC, as the person who was the lynchpin of the racket. 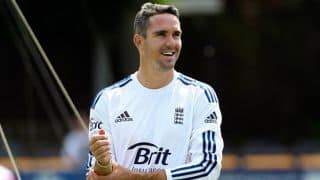