Hyderabad are at 11 for no loss after 1.1 overs against Delhi chasing a revised 117-run target.

Sunrisers Hyderabad (SRH) are at 11 for no loss after 1.1 overs against Delhi Daredevils (DD) in the Indian Premier League (IPL) 2014. Rain delayed the start of the run-chase and that resulted in the innings being reduced to 15 overs. The revised target was 117 for Hyderabad. This is Match 32 of the IPL 7 season. The match is being played at the Feroz Shah Kotla. Hyderabad captain Shikhar Dhawan had won the toss and elected to field.

Aaron Finch and Shikhar Dhawan began the run-chase for Hyderabad. Mohammed Shami bowled the first over. He bowled a bouncer that went over Dhawan and the wicketkeeper Dinesh Karthik for four byes. Shami then bowled a short delivery and Dhawan pulled the ball for a four towards deep mid-wicket to give Hyderabad a positive start. Siddharth Kaul bowled the second over. But after the first delivery, the rain came down heavily to halt play again. The players were hauled into the dressing rooms and the covers came out on the pitch.

Earlier, Delhi Daredevils posted a modest total of 143 for seven in their 20 overs. Dinesh Karthik top-scored with 39 off 30 deliveries and Kevin Pietersen scored a 19-ball 35 while opening the innings. Amith Mishra got his 100th wicket in the IPL. In doing so, he became only the second bowler to do so. He got two wickets for. Dale Steyn and Moises Henriques also took two wickets each for Hyderabad. 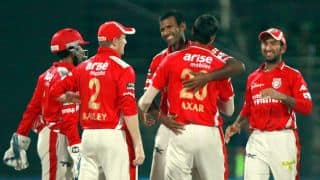