Bayliss said that his boys would like to give their best shot against Sunrisers Hyderabad.

Kolkata Knight Riders coach Trevor Bayliss said that his boys would like to give their best shot against Sunrisers Hyderabad in their Indian Premier League (IPL) 2014  encounter.

“It is obviously a very important game with both the teams vying for the fourth spot. A very important match for both sides,” he told reporters at a pre-match press conference.

Hyderabad has eight points and Kolkata 10 with both teams in contention for the fourth position.

On the wicket, he said he had not seen it as yet but added:”The last couple matches here, it looks like a very good batting wicket. Hopefully, we will see a lot of runs scored”.

Asked if Kolkata has any special plan against Hyderabad, which scored 205 runs in the last match against Kings XI Punjab, Bayliss said his side has a good bowling attack which should make the contest a close one.

“We will sit and have a look at that tomorrow. I am sure the bowlers have got new thoughts already, we got a reasonably good bowling attack who has bowled well this tournament. It should be a good contest between bat and ball tomorrow,” he said.

Replying to query about the good form of Robin Uthappa in the tournament, he said the dashing batsman is a confident player who cannot be contained easily.

“He [Uthappa] has looked very good. He plays in a conventional manner. He plays cricket shots and has worked hard. He times it beautifully, both front foot and back foot.

On captain Gautam Gambhir returning to form, he expressed happiness about it and said together with Uthappa, he has done well for the team.

“It is pleasing to see captain score some runs. He was a bit disappointed early in the tournament, but he has batted very well in the last four, five games together, they have put on some really good partnerships in the last four five matches,” Bayliss said.

Asked if they would like to target Hyderabad in any particular area, he said,”Against any team, it is hard to target anything in particular. They have got a good team, they have got a strong batting line-up and very good bowlers. We have to play very well to beat them and they have got to play some good cricket to beat us as well. Hopefully, it is a good game.”

Hyderabad coach Tom Moody said the team would be looking yet the right combination to play the final Eleven against Kolkata.

“We need to consider all options,”he said. Asked if the performance of Dalesteyn is anyway disappointing, Moody said Steyn is a world class player who can step -up in crunch games.

Asked if he felt that captaincy put pressure on Shikar Dhawan, he said the skipper played exceptionally well in the last match against Punjab, but had an unlucky dismissal.

“His game was slowing beautifully.He was unlucky last game. He said the momentum for us in the last game,” he said.

Reply into a query he felt that Hyderabad has failed to execute its defensive plan in the last match against Punjab despite setting a target of more than 200 run.

To a querry on Parvez Rasool, he said the young player was unwell for the last four days though he had a brief session today. 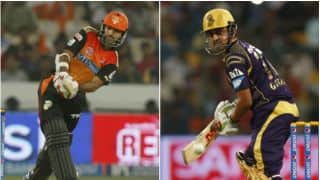 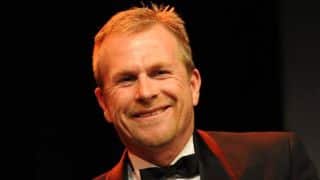