The Bengal wicketkeeper said he just played his natural game.

Kings XI Punjab batsman Wriddhiman Saha, who made a superb 54 to help his side score a thrilling victory over Sunrisers Hyderabad in an IPL match on Wednesday, said he enjoyed his batting and contribution to the team cause.

“We wanted to score the maximum in (first) six overs. We thought it would be easy for (Glenn) Maxwell and Miller and George Bailey subsequently. We wanted to do it by losing the least number of wickets. That’s what we did,” Saha told reporters in the post-match press conference.

Saha said he thoroughly enjoyed his batting on a good wicket at the Rajiv Gandhi cricket stadium.

“I wanted to bat to the fullest in first six overs and let the momentum go. It was a good wicket and I enjoyed my natural stroke making and hitting the ball that came my way.

“We decided that whatever boundaries etc we can get in six overs that will help the team, we wanted to rotate. That was in our practice,” he said to another query.

Hyderabad captain Shikhar Dhawan said his side could not execute their plans in the bowling department.

“We put up a great total on the board and we did not execute our plan very nicely in bowling. That cost us the game. We got (Glen) Maxwell out early but that was a no ball.

“After that, he hit a few sixes more. It would have been a different thing if that was not a no ball,” he said.

“In practice, we make sure not to overstep and what you practice you bring it in the game. It happens sometimes.

“Unfortunately, Maxwell is lucky both times. In the last game, Darren Sammy bowled no ball. This time, Mishra bowled no ball,” he said.

He said he tried different tricks in the book to get the better of Punjab batsmen whose momentum was never dissipated.

“I tried all my things and tried to mix up with their mind too well. Sometimes the batsman going on mid off somewhere, put a different field. I did that and they batted well. They got momentum from first over and it did not stop,” he said.

Talking about Dale Steyn‘s over which gave away 20 runs, Dhawan said, “There was turn for the bowlers on the pitch.

“That’s how we got Maxwell out, when we were bowling slow. We got into the game very nicely, after we got him out. Then again, one big over, Dale Steyn’s over got (gave away) 20 runs. If that over went our way, it would have been different.”

“After that over, the game changed totally.”

“Where there is hope, there is a way. Today, the day is over. It is gone. We can prepare for our next games and do our best. Nothing is impossible. Our batting is going good. Our bowling has always been a strength. Our boys are going to come back hard and do their job.” 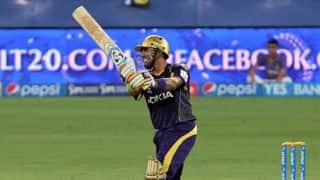