IPL 2014: Yuvraj's performance should have won the match for RCB, says Daniel Vettori

IPL 2014: Yuvraj's performance should have won the match for RCB, says Daniel Vettori

Daniel Vettori said that Twenty20 is more of a confidence game.

Royal Challengers Bangalore (RCB) coach Daniel Vettori spoke about his experience as coach and mentor for the Royal Challengers, Yuvraj Singh’s form, and the rise of leg-spinners in the Indian Premier League (IPL) 7.

In an interview with iplt20.com, Vettori said of his role as coach that it was a new experience for him. “It has been very different. The transition from being a player to a coach in such a short span of time is very similar being a captain. You try to set things up for the team and organize so that the team works as smoothly as possible. Then you just let the players go out there and play their game,” he said.

Asked whether this was the path he was looking at for the future, Vettori said, “I don’t know. Coaching in the IPL is a unique opportunity and I enjoy this challenge. But it requires me to stay away only for a few months. I have a young family and I don’t know if I want to stay away from them for long periods of time…I have also tried to bring in some planning and strategising, which is again similar to captaincy. The bulk of the job is to develop the younger players.”

Being a bowling all-rounder for the latter part of his career, Vettori when asked about whether he understood both batsmen and bowlers, said, “There’s not much to contribute in terms of bowling or batting. They all know what they are doing. T20 is more of a confidence game. We saw today how hard it can be – you can be in an excellent position and slip quickly. It’s more about trying to keep the guys confident when these things happen and preparing them for the next challenge mentally.”

Vettori went on to say that getting back after such a tight loss was difficult. “Just try to look at the things that actually went well during the match. Yuvraj, for instance, was under a bit of pressure, but he came out today and played exceptionally well with the bat and the ball. The likes of AB de Villiers and [Yuzvendra] Chahal have continued to perform for us consistently. You look at those things, but you also realise that at the end of the day, it all boils down to winning or losing. If you keep losing, you’ve got to change a few things here and there,” he said.

Vettori then spoke about Yuvraj Singh getting back to form. “He just worked it out for himself. He worked hard on his game against the spinners and made subtle changes. He gave himself a chance, got himself in and then we all saw the Yuvraj that we all have known so long. His performance really should have won us the game, but unfortunately we slipped up in the last four or five overs.

“He was trying to move his feet a bit more. He was getting caught in the crease in the previous matches and so today he made a conscious effort to premeditate his movement. It worked,” he added.

Vettori concluded by talking about the rise of leg spinners in IPL 7. “I think this has been a leg-spinner’s tournament – [Pravin] Tambe and [Rahul] Tewatia today for RR [Rajasthan Royals], [Amit] Mishra and [Karn] Sharma for SRH [Sunrisers Hyderabad] and Chahal for us. We’ve seen the rise of the leg-spinners, which is great because everyone loves watching a leggie in action. It’s a really tough art to master, but when you see these guys do so well, it inspires youngsters,” he said. 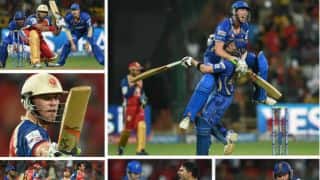 India to tour Bangladesh for three-match ODI series in June