CSK have virtually qualified for the play-offs after beating RR.

Almost assured of a place in the play-offs after the win over Rajasthan Royals (RR), Chennai Super Kings (CSK) in Indian Premier League (IPL) 2015 coach Stephen Fleming said the target now is to finish as the number one team in the preliminary stage.

“I do not think about the special advantage of being first or second. I think we need to win one more game at least and then we can have the luxury of introducing players. The situation will be that we will be losing a couple of players, Brendon McCullum in particular, and we are very mindful of that. But we want to make sure that we go to number one and then qualify,” Fleming said after the 12-run win over Rajasthan Royals. CSK had no need for Ashwin in game against RR, says Dhoni

Speaking about the win last night, Fleming said it wasn’t entirely blemish-free and there were occasional lapses.

“We had some lapses but really at good times. I think we were tired. We were really hurt by the last slogs because we had put up a good performance. Probably you do not see the scenario when you are winning. But the players are very determined to win and mistakes were made by very good players in between some great stuff. Yes, these are small causes for concern,” he said.

Fleming said it was not an easy wicket to play on. “But we were very determined to get a partnership going. Brendon dug deep enough to give us runs,” he said, lauding McCullum’s 61-ball 81. Chennai Super Kings vs Rajasthan Royals IPL 2015, Match 47: Highlights

Meanwhile, RR mentor Rahul Dravid said it was a tough track to bat on. “It was very slow and a little bit of turn as well. I thought it was good toss for CSK to win. I think 160 was always going to be tough on that wicket with the spinners and the kind of attack they have,” he conceded.

Dravid felt that skipper Shane Watson is extremely burdened given his all-round duties. “It is becoming pretty hectic for him to have to bowl at the death, think about fields to set for the other players and then come out and bat in the innings later,” he said. Irfan Pathan will lend Chennai Super Kings depth and stability

Dravid said his team is lacking in rhythm and has just not been able to get the momentum going. “We still can squeeze in and may be qualify. That is the nature of Twenty20 cricket, it is so much about momentum and rhythm. You lose one game and suddenly you have lost a couple of close games,” he explained. Rajasthan Royals’ batting order in IPL 2015 should be more settled 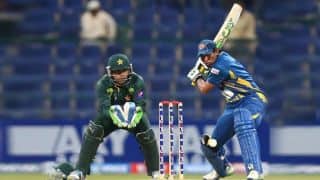 Pakistan to tour Sri Lanka in June-July this year