Delhi Daredevils have won two of their five games so far in Indian Premier League 2015.

Having won two of their five games so far in this edition, Duminy is confident about Delhi’s next three matches at their home turf.

“We are very hungry to set the record right especially in our home ground. We haven’t played well here, so we have three games to set things straight,” said Duminy at the eve of the of their sixth match this season.  IPL 2015: Schedule with venue details

“I am very positive with what we have produced. We have won 2 out of 5 and standing at fourth position at the moment and to me that’s not a bad position to be at this point of the tournament. We still have nine games to go and we would like to win predominantly most of them and give ourselves a chance to get into the playoffs. IPL 2015: Points Table and Team Standings

“But it’s not difficult for me to motivate myself and the team. We have created a good team culture, led by the management, led by Gary. So players are motivated to play for Delhi and win for Delhi, especially on our home ground. We’ll definitely see a different change come tomorrow,” the South African added. IPL 2015: Complete Coverage

Delhi did bounce back with two wins after two opening defeats but the previous loss to defending champions Kolkata Knight Riders at home did expose a few of their weaknesses.

Managing just 146 for eight against a lethal KKR bowling attack, the hosts faltered on the bowling front as Gautam Gambhir’s side cantered home in 18.1 overs.

Giving no excuses for the team’s below par showing, Duminy said the side has certainly learnt from their mistakes.

“All of us including myself need to stand up do some performance with the ball. Previous performance wasn’t great but it’s only game and we will take a lot of lessons out of the previous game and set them right, especially in the bowling department tomorrow,” he said.

“Our match-winners have been our two leg-spinners plus (Nathan) Coulter-Nile up-front. We have to build performance around them, we just can’t depend on them,” he added. 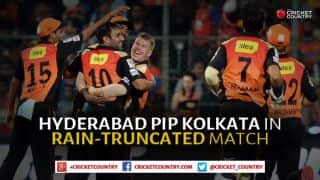