Delhi Daredevils have to beat Rajasthan Royals to have an outside chance of a top 4 finish.

After snapping their losing streak with a win over Delhi Daredevils (DD), Rajasthan Royals (RR) will now look to keep themselves on course for a play-off berth in Indian Premier League (IPL) 2015 with another dominating show against an inconsistent Sunrisers Hyderabad in their IPL cricket game tomorrow.

The Royals had blasted off to a great start by winning first five matches, before losing their way a bit with three losses and two no results but the 14-run win over Delhi on Sunday arrested the slide. Why IPL 2015 is virtually over for KXIP, DD, SRH and MI

The Shane Watson-led squad would be keen to regain their focus after a short break and apply the knock-out punch on Sunrisers tomorrow as another win could virtually ensure their berth in the play-offs with two games left in hand.

Sunrisers, on the other hand, have blown hot and cold right through the tournament and are currently placed at the second-last rung of the points table but the David Warner-led side will have a chance to avenge their humiliating 6-wicket defeat to the Royals at Vishakapatnam on April 16. IPL 2015: Rajasthan Royals lucky to have Ajinkya Rahane, says James Faulkner

Lack of consistency has been Sunrisers’ bane and they need to regroup and show the sort of form they displayed during their 22-run win over league leaders Chennai Super Kings last Saturday before slumping to a loss against defending champions Kolkata knight Riders two days ago. It’s seen that generally whenever their openers  captain Warner and Shikhar Dhawan fail to provide a good start, the rest of the Sunrisers’ batting line-up comes a cropper, which makes the innings launch a very important factor for the Hyderabad franchise.

They have a good seam bowling attack led by the likes of Dale Steyn and Trent Boult and backed up by Indian seamers such as Bhuvaneshwar and Praveen Kumar, but lack sufficient sting in the spin department even though they have added left-arm Bipul Sharma to complement leg-spinner Karn Sharma. Rajasthan Royals have the best uncapped Indian talents in IPL 2015

Royals have a strong batting order led by opener and tournament’s highest scorer Ajinkya Rahane, besides captain Shane Watson and Steve Smith to nullify the Sun Risers’ attack and post a big score or chase one. Two young batsmen came to the fore in Royals’ last two games with Sanju Samson blasting a brilliant 76 albeit for a losing cause against MI at the Wankhede Stadium and then Karun Nair scoring a quick-fire 61 against Delhi at the Brabourne.

Their exploits show Royals have other batsmen also to fall back on, apart from the top three. Royals also possess enough fire-power in their bowling attack with Tim Southee, Dhawal Kulkarni and Watson to trouble the shaky and top-heavy Sun Risers batting. Royals, thus, definitely hold a slight edge against the inconsistent Sunrisers for whom this is a make or break game as a defeat would virtually end their chances of making the top four. IPL 2015: Ajinkya Rahane left sleepless after getting out to a poor shot against Mumbai 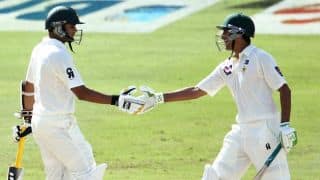